Energy storage is the key to making concentrating solar power plants an economical, reliable alternative to coal for electricity generation, and the US is determined to lead the field into new levels of efficiency. In the latest development, the Energy Department’s SunShot initiative is behind a new energy storage system based on chemical bonds that transfer heat as they store and release energy.

If R&D on the new system progresses, the result will be an energy storage system with greater density, translating into lower costs for electricity generated by concentrating solar power plants. In the context of US President Barack Obama’s new Clean Power Plan, that help sun-rich US states meet their carbon goals through solar-sourced electricity that is competitive with cheap natural gas as well as coal, this is very good news indeed. 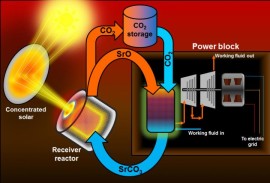 Here’s the rundown on the University of Florida’s contribution, from the Energy Department:

The University of Florida (UF), through the Concentrating Solar Power: Efficiently Leveraging Equilibrium Mechanisms for Engineering New Thermochemical Storage (CSP: ELEMENTS) funding program, is working on making concentrated solar power economically competitive with traditional forms of energy generation by driving the cost towards $0.06/kWh through the use of thermochemical energy storage (TCES).

The project uses inexpensive, safe, and non-corrosive strontium-based carbonates* and high temperatures from concentrated sunlight to break chemical bonds and store energy during the day time. During off-sun periods, the reaction is reversed to remake the chemical bonds previously broken, releasing the stored heat, and doing so at temperatures previously unachievable in other carbonate-based TCES processes.

The research team at UF has been using an alarmingly named screening method called Sacrificial Pore Formation to screen strontium-based carbonates for capacity and durability. That researched is aimed at modelling the economics of the new system, with the goal of demonstrating a capital investment of less than $10/kWhth (kilowatt hours – thermal).

The end goal is to drum up interest in the investor community to team up with the Energy Department and its academic partners, with the overall goal of generating solar-sourced electricity at less than $0.06 cents per kilowatt hour.

The new energy storage study is available at ChemSusChem, the Chemistry and Sustainability/Energy and Materials journal under the title “Solar Thermochemical Energy Storage Through Carbonation Cycles of SrCO3/SrO Supported on SrZrO3.”

The system works by using the reversible nature of strontium carbonate, which decomposes into strontium oxide and carbon dioxide. The decomposition process consumes thermal energy, which is released when the two substances recombine.

The research team points out several factors working in favor of the new system. It is based on cheap, non-toxic materials, and the high temperature of the operation could be deployed directly in a hot air turbine system, as well as generating steam for a steam-driven turbine. Overall, the low cost and high output could result in a tenfold increase in energy density, according to the research team.

So far the system has been tested on a small, pre-prototype scale. The researchers have already noted a decline in energy storage capacity after 45 heating and cooling cycles, expressed as “slowing carbonation kinetics.” Before the system gets to the prototype level, the next steps include drawing out the carbonation steps and addressing the issue of thermal shocks.

So, What About The Clean Power Plan

Speaking of innovative new energy storage systems, we got a preview copy of the Energy on the Edge episode of the new National Geographic Channel Series, Breakthrough. Check it out and you’ll get an idea of the gut-churning drama involved when your reputation and your research dollars are riding on the progress of your lab-work.

The episode also includes some great footage of the massive Crescent Dunes CSP plant as it commences a step in its startup run, including an insidery view of the actual molten salt.

The basic point that Energy on the Edge hammers home (thanks to some great storytelling by sci-fi veteran Akiva Goldsman), is that energy risk-takers are putting it all on the line to propel the human community into a sustainable model for energy generation.

Keep that all in mind when you hear about opposition to the Clean Power Plan.

Image: by Kelvin Randhir, courtesy of the University of Florida.