Goal Zero is a solar start-up that makes solar-powered battery packs, generators and solar panels. For example, the Goal Zero 10 Plus Battery Pack can charge an iPad or similar device and provides up to three charges. A Nomad 7 solar panel charges the battery pack, but it is sold separately. The pack also comes with a built-in LED flashlight than can operate for 20 hours per charge. 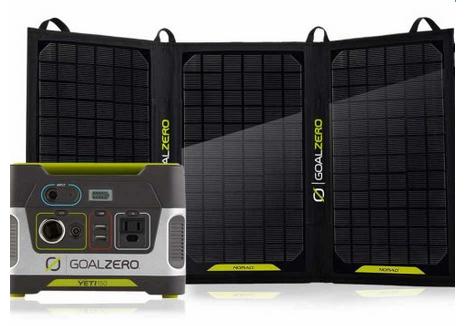 REI lists this product on its website, and it has a 4.5 star rating. The convenience it affords is remarkable because iPads are used so frequently and can be taken camping as well. (The fact that it appears on the REI site and has so many high ratings at least suggests it is effective for use in remote locations.) On Amazon, a similar battery pack sells for less than forty dollars. The entire kit that includes a seven-watt solar panel is about $110. With it, a laptop can be charged when there is full sunlight in about two hours.

Goal Zero also offers a home generator solar panel kit costing about $2,500. It can power larger appliances such as refrigerators and televisions.

Between the largest generator and solar panel systems and the small battery pack, Goal Zero offers many products of varying sizes. It’s no wonder NRG Energy was moved to buy the start-up. NRG is one of the largest independent power companies in America, so their executives may very well have a clear vision of the value of Goal Zero’s potential.

“It allows us to expand the opportunity of solar. Our ultimate goal is to energize people wherever they are,” explained an NRG representative.

NRG has about 10,000 employees and two headquarters – one in New Jersey and another in Houston. Most of its energy production comes from fossil fuel plants, but it has also been adding renewable energy to is portfolio.

Acquistions can present many challenges, mostly because of different company cultures. Start-ups are often driven by a founder’s sense of passion and purpose, whereas large, established companies typically have more bureaucratic processes. One thing that helps these kinds of transitions go more smoothly is identifying each organization’s culture and core values and then trying to integrate them in a balanced way.

Shell Invests In Solar With Acquisition Of 43%...

Renewables = Over 50% New Electricity Capacity But...