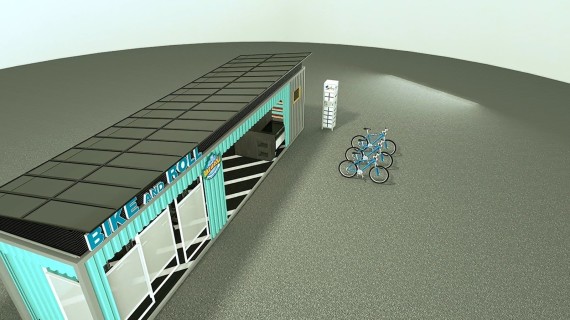 A self-contained solar plus storage power station built into a shipping container is serving as the showcase for some of the latest in Taiwanese cleantech innovations, and this off-grid Eco-Power Station (EPS) will serve as an electric bike station at a state park in New Jersey in the spring of 2016.

The Green Trade Project Office, described as “Taiwan’s leader in promoting and integrating green products and services,” designed the EPS, which features 5 kW of GEAC’s thin film solar modules, a 5 kW lithium-ion battery, and a hydrogen fuel cell backup system, all built into a standard 40 foot by 8 foot shipping container. The rooftop solar modules feed the smart grid built into the EPS, as well as charge the battery bank, and a remote monitoring and energy management system adds a layer of optimization and control to the entire unit.

In the event that solar energy production at the EPS is disrupted, and the energy storage system is discharged, a hydrogen fuel cell system from M-Field can provide complete backup power for more than 8 hours at maximum output, allowing for uninterrupted operation.

A number of other innovations were also built into the EPS, including an insulated coating from Heatax, which is said to be able to reflect up to 88% of the sun’s heat and to be long-lasting and “very affordable,” and a spray-on coating for building surfaces from Nustone that gives surfaces “the look and feel of stone.” 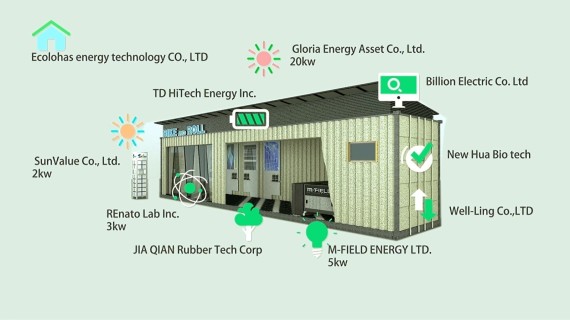 The inside of the EPS container is covered with rubber flooring tile from Jia-Qian Rubber Tech, made from 100% recycled tires, and sitting outside the unit is a “solar pillar” from SunValue, which is essentially a piece of functional artwork that uses “solar-power” bricks to charge cell phones and other mobile devices. According to the Green Trade Project Office, these solar bricks can be integrated into existing buildings, and are especially suited for vertical installation.

The Eco-Power Station, which cost about $100,000 to build, will be shipped to Liberty State Park, New Jersey, in March of 2016, and will be used as an electric bicycle charging station and rental center for Bike and Roll, which will pay for its use “based on how much electricity it is able to conserve thanks to the Eco-Power Station.”