Recently, SolarCity announced it will begin manufacturing the “world’s most efficient solar panels” at its factory in Buffalo, New York, starting in 2016. It claims it has designed a panel that converts 22.1% of sunlight into electricity. 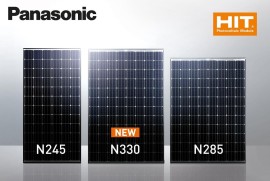 Now, less than a week later, Panasonic says it has trumped that achievement. A Panasonic solar panel has established a new world record module conversion efficiency of 22.5% on a commercial sized prototype using solar cells based on mass production technology. The test results were confirmed by the renowned Japanese National Institute of Advanced Industrial Science and Technology. The 72-cell, 270-watt prototype incorporates newly developed enhanced technology that will eventually be scaled into volume production.

Panasonic also says it is introducing the HIT® N330, the latest addition to the company’s high-efficiency hetero-junction photovoltaic module product line and its most powerful photovoltaic module to date. It will be available in the UK and other European markets starting in March, 2016. Manufactured at Panasonic’s state-of-the-art, vertically integrated solar fabrication facilities in Malaysia, HIT® N330 features 19.7% module-level efficiency and a nominal power output of 330 watts.

The new 96-cell module returns approximately 27% more peak-power compared to mainstream 260-watt multi-crystalline modules. Because of the increased power for the same number of modules and roof area, installers will have significantly lower system costs on residential and commercial installations by using panels with the N330 array.

The HIT® N330 offers higher energy density per square meter and reduces the total number of modules required, making it ideal for European ‘self-consumption’ markets,” says Roca. “For solar installers, the high-performance HIT® N330, represents the ideal complement to their existing Panasonic Solar portfolio, delivering the missing tool to achieve more power on any roof and to maximize balance of systems savings and lower installation costs.”

Between the SolarCity announcement and the one from Panasonic, it is clear that the future of solar power is only going to get brighter over time as manufacturers figure out how to get even more electricity from a given area of solar panels.