Scientists at UNIST — the Ulsan National Institute of Science and Technology in Korea — report an important new achievement in perovskite solar cell (PSC) technology. Their research has resulted a cost effective way to produce inorganic-organic hybrid perovskite solar cells that are nearly as efficient at turning sunlight into electricity as traditional silicon cells. The scientists believe their work will lead the way to the next generation of high efficiency solar cell technology and will help accelerate the commercialization of PCSs. 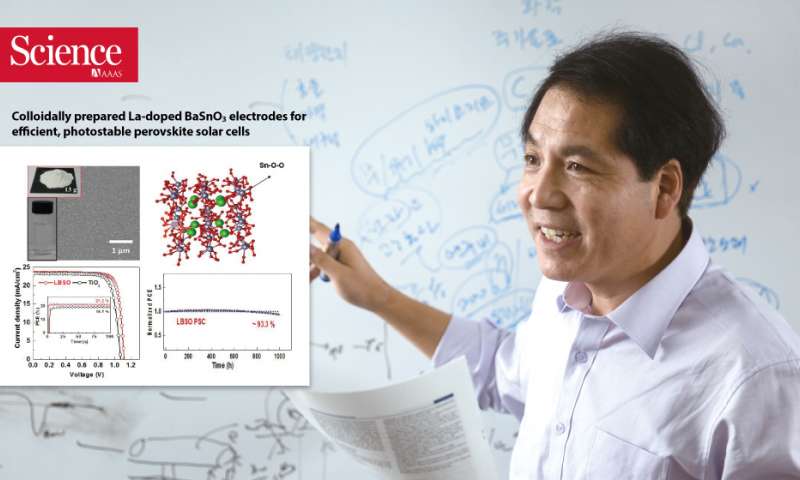 Perovskite solar cells are a mixture of organic molecules and inorganic elements within a single crystalline structure. Together they capture light and convert it into electricity. They can be manufactured more easily and cheaply than silicon based solar cells. They can also be bonded to a flexible backing, which means they can be used for many applications where traditional solar panels are not feasible, such as on the roof  and fenders of electric automobiles.

The new cells excel at what scientists call photostability, which is the ability to withstand exposure to light without a significant degradation. This new material retains 93% of its initial performance after 1,000 hours of exposure to sunlight. The synthesis of the material for the electrode can take place at temperatures as low as 200 degrees — much lower than the 900 degrees required by previous designs.

In the study, the research team has also proposed a new solar cell manufacturing methodology, entitled the ‘Hot Pressing Method’. This technique bonds two objects together by applying both temperature and pressure, which makes the production of low cost, high efficiency, and stable perovskite solar cells possible. The PSCs developed by the UNIST scored a 22.5% efficiency rating, which compares favorably to the 25% of a traditional solar cell.
“This study combines the newly-synthesized photoelectrode material and the hot-pressing method to lower the manufacturing cost to less than half of the existing silicon solar cells,” says Professor Seok, principal author of the paper. “This study helped us realize PSCs with a steady-state power conversion efficiency of 21.2% and excellent photostability. This achievement, realized by the unique technology of domestic researchers, has surpassed the conventional low efficiency and stability limit of next generation solar cell technology.”

Swedish Solar Has An Option To A Conventional Rooftop Solar System