We were just talking about the accelerated pace of R&D for perovskite solar cells, and along comes the University of California, Los Angeles, with another contribution to the perovskite pot. Put that in the context of the lawsuits sprouting up against President Obama’s new Clean Power Plan, and you have yet another instance of the fossil fuel lobby waging battle in a war that’s already been lost.

That’s because perovskite is a cheap, easily manufactured material that has the potential to force the cost of solar energy even lower than it is today, forcing its chief competitors — coal and natural gas — off the electric power plant field, Clean Power Plan or not. 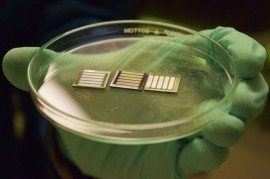 By the way, did you know that the iconic fossil fuel producing state of Texas is already well on the way to meeting its Clean Power Plan goals? More on that in a second.

Where were we? Oh right, perovskite solar cells. For those of you new to the topic, perovskite actually refers to a class of synthetic crystalline materials based on the unique properties of the naturally occurring mineral perovskite.

Perovskite offer enormous promise in terms of solar cell conversion efficiency, but they also have an enormous Achilles heel, which is their tendency to fall apart when exposed to air, especially humid air.

Just this week we took note of a futuristic new development in the field involving so called hot-carrier perovskite solar cells, but the new perovskite solar cell research from the University of California – Los Angeles (UCLA) is a bit more down to earth in terms of solving the air-phobia problem.

A team from UCLA’s California Nanosystems Institute has figured out a new way to stabilize perovskite, basically by creating a perovskite solar cell sandwich.

The conventional approach is to use an organic material as the top buffer layer, in order to get the solar-generated electricity out of the cell. However, the materials typically in use aren’t all that stable themselves, and provide relatively poor cover for the perovskite layer.

By replacing those layers with metal oxides, the UCLA team achieved a “dramatic” difference in longevity. Specifically, the new perovskite solar cells are composed of layers in this order: glass, indium tin oxide, NiOx (oxidized nickel oxide), perovskite, zinc oxide, aluminum, with the ZnO layer providing protection by keeping the aluminum from the perovskite.

Okay, so that doesn’t solve the entire problem, but it indicates that the way forward is to engineer metal oxide layers that are more dense, providing better protection for the perovskite.

You can read all about it in the journal Nature.com under the title “Improved air stability of perovskite solar cells via solution-processed metal oxide transport layer.” The study includes a relatively plain-language description of the challenges involved in engineering a long-lived perovskite solar cell.

UCLA’s press materials also provide a good snapshot of just how fast the rate of perovskite R&D is accelerating. The team started less than two years ago with a conversion efficiency of less than one percent, and it’s already closing in on the 20 percent mark. In the new study, the relatively stable version clocked in at approximately 14.6 percent plus or minus 1.5 percent, for a maximum of 16.1 percent.

As for the Clean Power Plan, our friends over at TheHill.com have been tracking the “quagmire” of lawsuits pouring in from legislators and businesses over the whole bundle of Obama Administration executive actions on climate and environment.

However, the Clean Power Plan may suffer death by a thousand cuts — and Senator Inhofe may schlep a boatload of snowballs to the Paris climate talks — but the simple fact is that the cost of renewable energy generally, and solar energy in particular, has been dropping like a stone despite efforts by the fossil fuel lobby to monkeywrench progress at the federal and local level. When you put an army of scientists up against an army of lawyers, science is already winning. If you prefer sports metaphors, let’s call it a horse race.

In the case of solar energy, the march of technology is only part of the equation. Costs have also been dropping because the Obama Administration has been focusing on smoothing over “soft” bumps for solar energy such as the permitting process, zoning rules, and administrative costs. Those soft costs still account for about 70 percent of the installed cost of a solar array, and the Energy Department has big plans to push that figure way down with a new “same-day” rooftop solar initiative.

If you prefer nature metaphors, take a look at Texas and you’ll see why the Clean Power Plan obstructionists are barking at a losing tree. Thanks partly to its magnificent wind resources, as well as a huge incentive to improve its transmission infrastructure, Texas is already well on its way to meeting its Clean Power Plan goals, even without sporting the kind of clean energy political image that some other states have been working on.