REC Solar is Europe’s largest brand of solar panels, having produced more than 15 million panels by the end of 2014. Based out of Norway, the company revealed its third quarter financial earnings report this past week. The company saw an all time high quarterly revenue figure of $234 million, up 39% compared to just a quarter earlier. Shipments were up, jumping 100 MW to 361 MW, with module sales to the US of 207 MW, accounting for nearly 60% of the company’s total Q3’15 sales.

As can be seen, however, the geographic split across the year is much more evenly spread, and dominated substantially by China. 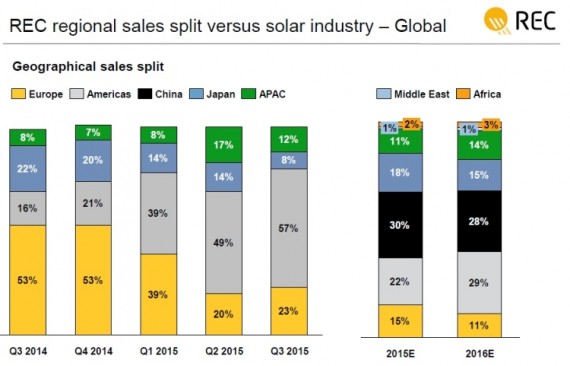 The company is also expecting its annual global module sales to reach around 59 GW by the end of 2015, and jump another 10% by the end of 2016 to 65%, before plateauing somewhat afterwards.

“We are extremely proud on this record quarter, demonstrating our sustainable and profitable growth, quarter after quarter,” said Steve O’Neil, CEO at REC Solar.

“Continuously declining PV system costs are one of several key drivers for the industry. We are also expecting a strong agreement at the UN Climate Change conference, reflecting the ambitious targets on emissions and renewable energies set by around 150 countries worldwide in advance. This should further increase solar’s momentum, which we will continue to leverage. Besides expanding our module capacity to 1.7 GW by end of 2016, we are exploring new business models and penetrating new emerging markets.”

REC Solar is looking towards strengthening its footprint in the Middle East, as well as opening up new regions in Africa.