We’ve been spilling a lot of ink over perovskite solar cells recently, and here comes Brown University with yet another breakthrough. Along with researchers from the National Renewable Energy Laboratory, the Brown team has figured out a way to grow larger perovskite solar cells while keeping the conversion efficiency at a fairly high level. (h/t James Wimberley) 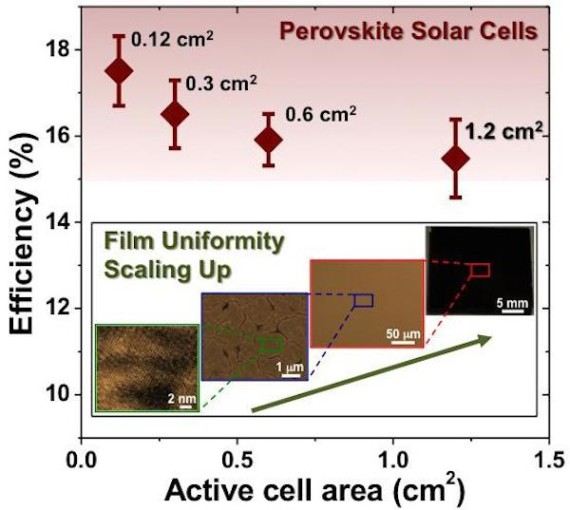 The Promise Of Perovskites

Solar researchers are all over perovskites, a class of synthetic crystals that mimic the unique structure of naturally occurring perovskite. Perovskites could become a low-cost, easy-to-manufacture substitute for silicon in solar cells, and researchers have been slowly breaking down the barriers to achieving that.

One problem, according to the Brown team, is that while relatively high solar conversion efficiencies of more than 20% have been reported in the laboratory, those are based on very small samples, typically 1/10 of a square centimeter.

Conventional processes for producing larger perovskite solar cells have fallen short in the quality department, with defects that interfere with efficiency.

The new study can be found in the journal Advanced Materials under the title “Square-Centimeter Solution-Processed Planar CH3NH3PbI3 Perovskite Solar Cells with Efficiency Exceeding 15%.”

It’s based on a perovskite fabrication process previously developed at Brown, in which a solvent containing perovskite precursors is spread out on a substrate. An “anti-solvent” is then applied to get rid of the first solvent, leaving a nice smooth film of perovskite crystals.

The beauty of this method, aside from yielding a high-quality product, is its potential for scaling up to a commercial rate while keeping costs down, one factor being its ability to produce perovskite solar cells under room temperature conditions.

Scaling that process up is the challenge tackled by the new perovskite study. Here’s the rundown from Brown:

“The trick is to add excess organic precursor that initially “glues” the small perovskite crystals and helps them merge into larger ones during a heat-treatment, which then bakes away the excess precursor.”

Initial results for the new perovskite solar cells show an efficiency of 15%, which is not bad considering the potential to churn them out quickly and cheaply.

The team is pretty confident that this method, or one closely resembling it, could eventually get up to the 20% range and higher.

From The Lab To… Your Electric Vehicle

We’re still a ways away from a perovskite solar cell in every pot (except for maybe these guys), but when perovskites break through, there could be some very interesting applications in the mix.

In particular, we’re keeping an eye on this one with our sister site Gas2.org —  a perovskite coating for electric vehicles, which would recharge your battery on the go a lot more efficiently than strapping a panel of silicon solar cells on top.

Earlier this year, we also floated the idea that Volkswagen might be toying around with a perovskite based EV battery, with a decision on the new battery apparently due this past July.

That date has come and gone, and the last we heard, Volkswagen chief Martin Winterkorn was still teasing the idea, so if you’ve heard anything drop us a note in the comment thread.

Meanwhile, of course, Winterkorn has left the company, which appears to have its hands full with other matters.