New figures from the US Energy Information Administration show that renewable electricity generation is surpassing levels from previous years in every month of 2016 so far, which comes as no surprise given that renewable energy dominated.

According to the new figures provided by the Energy Information Administration (EIA), based on data through June, “Renewable electricity generation has surpassed levels from previous years in every month so far this year.”

This is not only good news for the renewable energy industry in the US as a whole, but also specifically for the large-scale hydro sector, which had suffered a lengthy drought across the US West Coast. Hydro generation has increased, and has now returned closer to historical levels.

The figures from the EIA represent both conventional large-scale hydro, as well as non-hydro sources such as wind, geothermal, biomass, and solar, and are restricted to utility-scale projects whose capacity exceeds 1 MW, as well as estimates for distributed solar PV generation.

The hydro sector had suffered dramatically from drought, reaching its lowest level in 2015 since 2007, primarily due to drought conditions in the Pacific Coast states — a sizeable issue, considering that California, Oregon, and Washington together contain 50% of US conventional hydro capacity.

We have seen non-hydro generation increasing steadily over the last few years, and in March of this year, it collectively exceeded 10% of the monthly electricity generation mix for the first time — repeating that achievement again in April.

Unsurprisingly, and as we have seen repeatedly in other reports, capacity additions for non-hydro renewables have collectively accounted for most of the electric capacity additions made over the past three years in the US from renewables, thanks in part to the declines in capital costs for wind and solar. Coal electricity has fallen from 34% of electricity generation in H1 2015 to 28% in H1 2016, on the back of numerous coal power plant retirements. 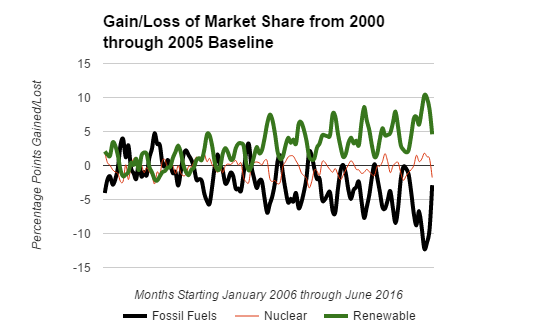 Images by the US EIA (first two) and CleanTechnica

Sheep Are Ideal For Controlling Weeds And Grass At Solar Farms