Navigant Research has concluded that revenue from the global market for solar PV combined with energy storage nanogrids is expected to reach $23.1 billion in 2024.

A new report published by market research and consulting firm Navigant Research has investigated the rapidly expanding market for solar PV systems combined with energy storage nanogrids, and determined that by 2024, revenue from this industry is likely to reach $23.1 billion, up from its current $1.2 billion in 2015.

“Nanogrids, small, modular distribution networks, are considered the antithesis of the bigger-is-better economies of scale thinking that has guided energy resource planning over much of the past century,” said Navigant Research analysts, who investigated the role of energy storage nanogrids with “distributed solar PV installations in behind-the-meter building-level applications for residential and commercial customers.” 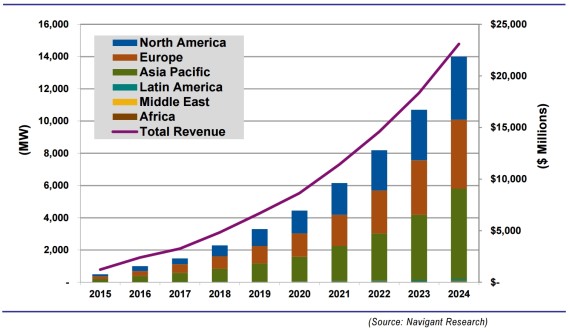 “This segment of the nanogrid market has shown incredible traction just within the last few years, due in large part to the decline in costs of both solar PV and advanced energy storage technologies such as lithium ion batteries,” said Peter Asmus, principal research analyst with Navigant Research. “Other factors have been creative business models, regulatory reforms, and an explosion of investment in creating a new distributed energy resource landscape.”

Even the looming expiration of the US federal Investment Tax Credit for solar PV, combined with the “growth in global utility opposition to traditional solar PV support mechanisms such as net metering and feed-in tariffs” are only serving to “build the business case for solar PV plus energy storage nanogrids.”

The solar PV plus energy storage nanogrid market is expected to be led by the three more developed world market regions — North America, Europe, and the Asia Pacific region. Europe currently stands as the world’s largest market for solar PV plus energy storage nanogrids, with an estimated 185.5 MW of new capacity additions in 2015 alone, which is expected to increase to 4,272.1 MW by 2024. The Asia Pacific region follows close behind Europe with an estimated 184.4 MW of new capacity additions in 2015, before overtaking Europe as the largest global market in 2016, and maintaining that lead over the forecast period, reaching 5,619.9 MW by 2024. North America will remain the third largest market over the forecast period, with 122.2 MW of new additions in 2015, growing to 3,918.2 MW by 2024. However, North America can rest solid in the knowledge that it is the clear leader for commercial PV plus energy storage nanogrids, accounting for around 80% of the global market over the 10 year period.

300 MW Solar PV For Egypt From Sterling And Wilson