The solar manufacturing industry is now a highly competitive industry. Solar module companies that can’t compete are dropping like  icicles on a warm spring day. Shell dropped out of the solar module race in 2006, giving its solar business to SolarWorld. 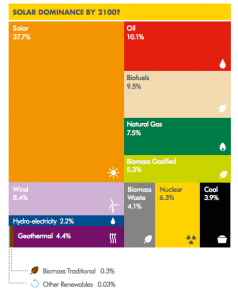 Nonetheless, Shell is still quite bullish on solar energy in the long term. In one of the two future energy scenarios it just released (the New Lens Scenarios), it projected that solar would become the largest source of energy by 2070.

Solar industry enthusiasts (which I assume most of you are) know that solar power has grown tremendously in the past several years — to be specific, from about 1 gigawatt (GW) in 2000 to about 102 GW at the end of 2012. It is still a small piece of the energy or even electricity pie, but it’s growing fast. And, most importantly, it looks like it will have a very bright future.

In both of Shell’s new scenarios, which are led by Jeremy Bentham (Vice President Business Environment and Head of Shell Scenarios), the company sees global CO2 emissions dropping to zero by 2100, but through very different means. In the first, its projection is that solar will account for 37.7% of primary energy use by 2100. The company is also bullish on natural gas, electric vehicles, hydrogen (as a transportation fuel source and resource for electricity storage), biofuels, and wind power (compared to other energy sources). But there’s much more to the story than these simple statements.

The report includes some interesting discussions of the increasing competition between the U.S. and China; globalization, and some of the complex issues that come with that; three paradoxes, which it calles the prosperity paradox, the connectivity paradox, and the leadership paradox; the structure of the global economy; and other interesting matters.

Following that setting of the stage, Bentham and his team at Shell delve in its two new scenarios — Oceans and Mountains. They write: “These scenarios are designed to provide new lenses through which to explore these issues – or, as we explore these contrasting worlds, two panoramas: high Mountains where the beneﬁts of an elevated position are exercised and protected, and those who are currently inﬂuential hold on to power; and wide Oceans with rising tides, strong currents, and a volatile churn of actors and events with an irregular accommodation of competing interests. These panoramas have distinctive social, economic, and political features that can be discerned over the next 20 years or so, with consequences for energy developments over half a century. Together these shape ecological outlooks beyond 2100. They form the New Lens Scenarios for the 21st century.”

For those of us concerned about societal suicide through climate change, neither scenario is particularly optimistic. In Mountains, world temperatures increase well beyond 2°C by 2050 (a politically agreed upon target that is still concerning in the level of catastrophe it brings to humanity). Really, the Mountains scenario relies on a great deal of carbon capture and storage (CCS) in the second half of the century in order to reach zero net CO2 emissions by 2100:

And if you thought the Oceans scenario would be better due to the higher penetration of solar power, you’d be mistaken. The long and broad use of oil, coal, and natural gas in this scenario still paint a bleak climate future. Shell writes: “Global economic growth, the continued importance of coal in power generation, and oil in transport accompany the continuing growth in greenhouse gas emissions in Oceans. Offset by efficiencies and renewable energy, greenhouse gases reach a plateau where they remain from the 2030s to the 2050s. By this time, the elevated levels of CO2 in the atmosphere are clearly shown to be linked with the observed increase in extreme climate events. these ultimately drive policy changes and the deployment of technologies that have been on the back burner, and complement sporadic efforts to price emissions.” Here’s the CO2 emission trend: 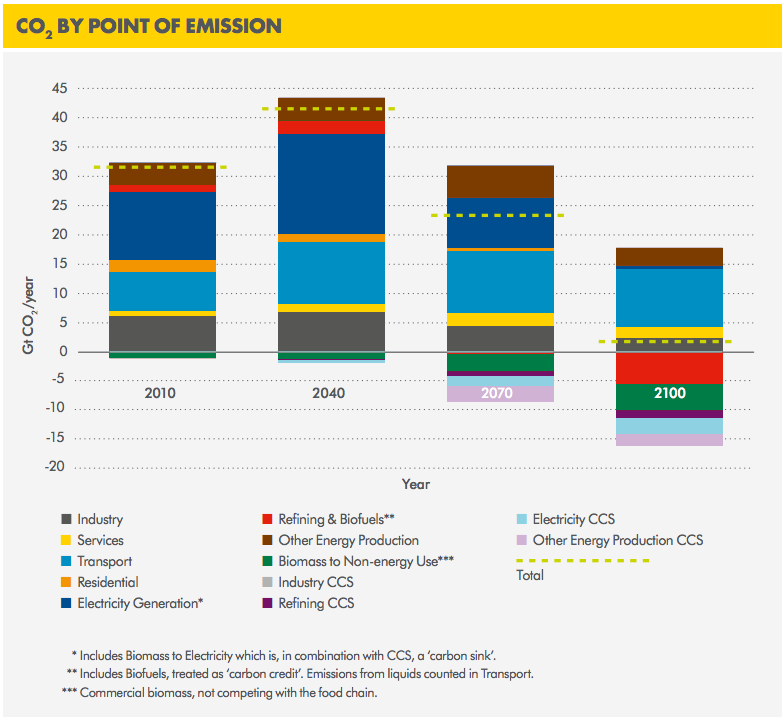 And here they are in one graph, compared to a 2° pathway: 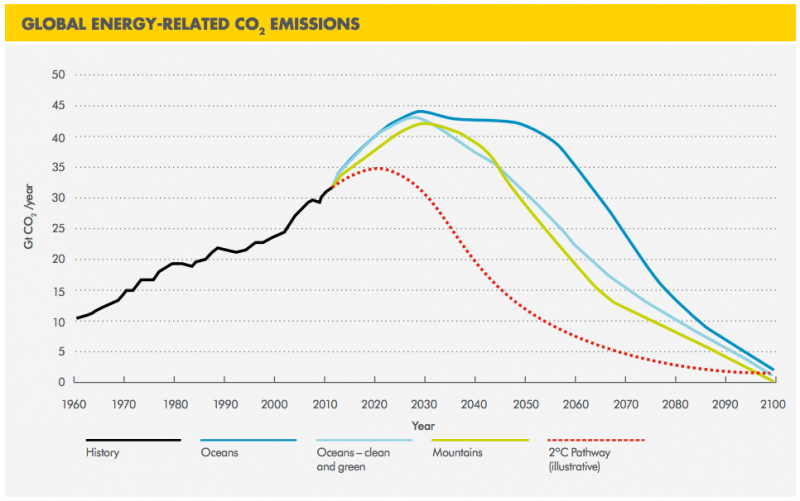 But these are just two scenarios, with many, many, many assumptions. And the assumptions make the projections. The fact of the matter is that scenario production is just an advanced game of guessing. But it’s also a form of actively trying to shape the future. While Oceans and Mountains differ, they stay within a certain universe of options that others have gone beyond.

Furthermore, the Mountains scenario is largely about those in power retaining power to a greater degree, yet it somehow comes up with a better or at least equal CO2 emissions reduction curve. In other words, Shell promotes the idea through this comparison (which is based on innumerable and diverse assumptions) that it would be better (climate-wise) for those with more power (e.g. Shell) to retain that power. Of course, it doesn’t put it so directly, but the implication is clear.

But, again, Oceans and Mountains both stay within a certain universe of scenarios. They could both be wildly off.

But What Do Others Think?

As I noted on ZacharyShahan.com recently, a report by Ren21 has done an excellent job of comparing renewable energy projections or scenarios from a wide range of organizations, companies, and government agencies. That comparison shows very clearly that oil company projections/scenarios have generally been much less bullish on renewables than projections/scenarios from organizations like WWF and Greenpeace, and also less than those from “neutral” (but still very conservative) bodies such as the International Energy Agency (IEA).

From Shell: “In the New Lens Scenarios, renewables reach a 30–40% share of total energy by 2060 in Mountains and Oceans, reaching perhaps 60–70% saturation if the time horizon is extended still further. Some may be disappointed with this figure, but there are good reasons why we will do well to reach even this level.” The company then goes on to do some hand waving regarding renewable energy potential (it’s not exactly the optimist on that front). As you can see above, Shell’s highest renewable energy projections seem to be well above ExxonMobil’s and BP’s, but they’re still well below WWF’s and Greenpeace’s.

One matter discussed throughout Shell’s new report is how wealth is dispersed throughout society. For example, see this line and graph: “The original Us Gilded Age led to the ‘progressive era’, marked by the presidency of Theodore Roosevelt from 1901, after public opinion, concerned about the exploitation and abuses of the time, began to push back against its excesses. A more activist government addressed the interests of small business, farmers, and labour movements, seeking to clean up the political process and curb abuses by breaking up large businesses and monopolies. The work of journalists and activists such as Ida Tarbell was seminal to this movement. But it was not until President Wilson’s introduction of estate and income taxes and his reforms against trusts, followed by Franklin D. Roosevelt’s New Deal, that income inequality began to be compressed. The New Deal effectively ended the Gilded Age and gave rise to a society of broadly shared prosperity and a period of stable growth that continued until Reagan’s era in the 1980s, when social and economic divides began to widen again.” 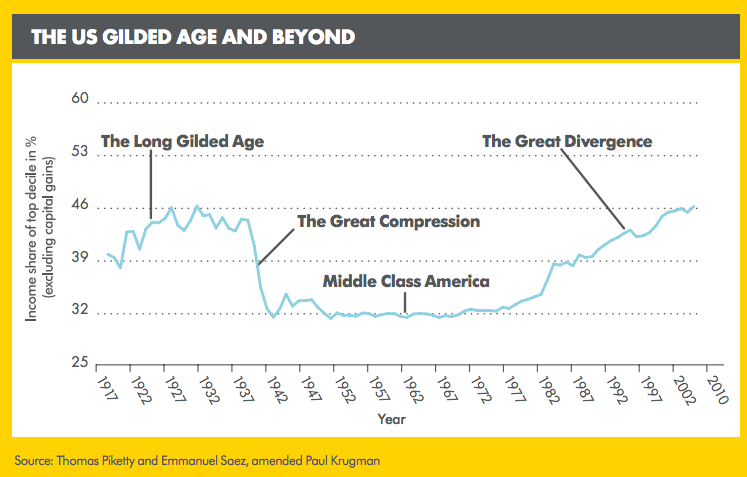 The attractiveness of decentralized solar power that lets common citizens share in the wealth of the tremendously large energy industry, or at least stop giving their own wealth to it, is a powerful force that many of us solar enthusiasts presume may stimulate exponential growth in solar for years to come. If that happened, solar could even go way beyond the projections in Shell’s Oceans scenario, especially if combined with a similar growth in electric vehicles.

However, that is a great threat to many of the super rich, which the graph above shows have taken over the economy since the beginning of Reagan’s term as president. As such, there is great pushback from these rich and powerful people, rigging of the energy policy landscape wherever they can accomplish it, and enough misinformation put out there and repeated constantly to confuse the public and keep many people asleep to the potential of a democratized energy system. The question really is how much those at the top of the economic ladder will or will not keep the masses from bringing about a solar revolution in the coming decades (which would also likely be combined with an EV and energy efficiency revolution).

Of course, there are many other societal factors to consider. But I think this post covered enough for now. Like it? Share it with your friends and family!

Graphene: A Jaw-Dropping Material That Can Improve Solar Cells