To hear Tesla tell it, the Powerwall residential storage battery is the greatest invention since sliced bread, but not everyone agrees. SimpliPhi has just announced its own home battery storage that is says outperforms the Powerwall in every parameter and costs less, too. 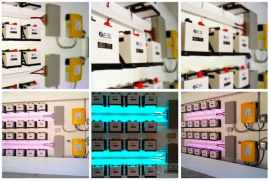 What make the SimpliPhi battery different? According to CleanTechnica, it’s a lithium0ion battery like Tesla’s product, but uses no cobalt. CEO Catherine Von Burg says, “Our products do not generate heat or require ventilation or cooling and do not pose the risk of thermal runaway characteristic of lithium cobalt based batteries, and this creates significant efficiencies and savings for any given installation.”

Those are important considerations. Conventional lithium-ion batteries require built-in cooling systems that add complexity, cost, and weight to the finished product. You may recall earlier this year when a Boeing Dreamliner caught fire at London’s Heathrow airport due to a problem with its lithium-ion batteries.

But the SimpliPhi battery has other advantages as well, according to Utility Dive. It can be fully discharged without damage and has a much higher maximum discharge rate. It also operates at better than 98% efficiency over more than 5,000 discharge cycles, which makes it suitable for daily use. The company says its battery operating costs are 1/5 those of the Powerwall.

SimpliPhi CTO and founder Stuart Lennox was working in the film industry in 2001 when he scouted an e-bike as a prop for a commercial shoot. Film sets are a welter of power cords all running various cameras and sound equipment. Lennox was struck by how much simpler things would be if each piece of equipment had its own built-in battery. Lennox says, “I was so impressed with the battery in [the e-bike], I took out a loan on my home, went to e-bike and had six custom battery prototypes made that could be used to power 35 MM movie cameras and portable lighting to my specifications.”

By 2002, Lennox founded the LibertyPak company based on lithium-ion batteries incorporating cobalt. Within five years, though, LibertyPak transitioned to another new technology, the even better performing lithium ferrous phosphate (LFP) platform.

In 2010, LibertyPak began working with SimpliPhi, headed by Van Burg. Doing business as Optimized Energy Storage (OES), the partnership secured important contracts with the Department of Defense to provide onsite storage of electricity and thereby reduce the amount of petroleum products that need to be transported in combat zones. Tanker convoys were primary targets for insurgents in Iraq and Afghanistan.

The OES mission, as set forth on its website, is comprehensive and far-reaching:

SimpliPhi has not released pricing information for its home battery storage products at this time.