New research out of the UK finds that CSP isn’t dead after all… it has quite a promising future in small-scale applications in developing countries.

“The new research for the DECC investigates the potential to accelerate the deployment of small-scale concentrated solar power (CSP) in various developing countries, with a focus on industrial process heat and rural on/off-grid applications,” an email to me noted. 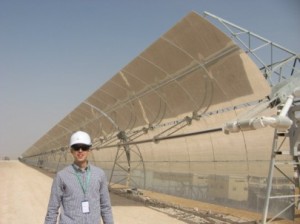 I know that, when I talked to solar engineers at Abu Dhabi’s world-leading CSP plant, they were confident CSP use would grow considerably in the years to come, even if it did so much less than solar PV (as I think everyone in the business now predicts). For many applications, CSP is simply far more expensive than PV, so not preferred. What will likely become the world’s largest solar power plant actually switched from CSP to PV technology recently. That said, CSP does have some benefits, such as the fact that it also produces heat that can be used for industrial processes if co-located.

Getting back to this report, James Rawlins, Associate Director and author of the report commented: “Small-scale concentrated solar power has major potential for a number of niche markets in developing countries, such as industrial heat. However, to date this potential has not yet been realised bar some interesting developments in India, by far the leading global market. With further demonstration to leverage this Indian experience we believe the technology could play an important role in providing low carbon energy and economic development in Latin America and Africa.”

However, despite the promise, there are some key barriers to widespread industrial application. For example, “low awareness that CSP is a potential energy source for industrial process heat, lack of confidence that the technology works in local conditions and applications, and payback periods that are considered unattractive by potential customers,” as the email to me noted. “For rural / off-grid applications the critical barrier is the lack of an optimised and proven technology solution.”

So, how to get beyond these barriers, which are basically knowledge, awareness, and trust barriers? Demonstration projects are one clear method the researchers promote, suggesting a program of such projects. The researchers recommend doing so across three or four countries. They specifically recommend leveraging Indian experience and best practices.

What are your thoughts? Think CSP has a bright future for small-scale applications in developing countries? Anything more than that? My thoughts line up with the projections above pretty well, but I’m not so sure about how easy it will actually be to break through those barriers to growth, as well as financing challenges in developing countries. If I had to guess, I’d say that CSP won’t take up that much of the market, but I could very well be wrong.