Have you read any news articles about solar roads? Well, there’s a kind of solar road already in operation and it has been producing more electricity than was expected. Roads occupy a lot of surface area and solar panels need open spaces, so combining them is a logical notion.

A solar bike path not far from Amsterdam has already generated 3,000 kilowatt hours of electricity. The electricity generated by the path is sent to the regional grid or used for streetlights.

As the saying goes, “It isn’t much, but it’s a start.” The path is only 230-feet long, so there is potential to create much longer ones and presumably greater electricity output. It has been estimated that about 20% of Dutch roads could be candidates for solar power systems.

The Netherlands is not a great country for renewable electricity yet, so it seems a little odd that a solar bike path would be adopted there, but maybe it is an indication of a shift in mindset, or just the exploratory nature of the Dutch.

The solar bike path is made of prefabricated concrete modules that have a 1-cm-thick glass layer on top and solar and silicon solar cells underneath. Safety glass was used, so if there is any breakage there would not be any dangerous shards.

One possible use for solar roads in the future would be generating electricity for electric vehicle chargers nearby, so travelers could recharge their vehicles conveniently.

Also, it has been estimated that the Netherlands could only get about 25% of its electricity from solar power if all the rooftop space was utilized, so road surfaces might help generate the rest. 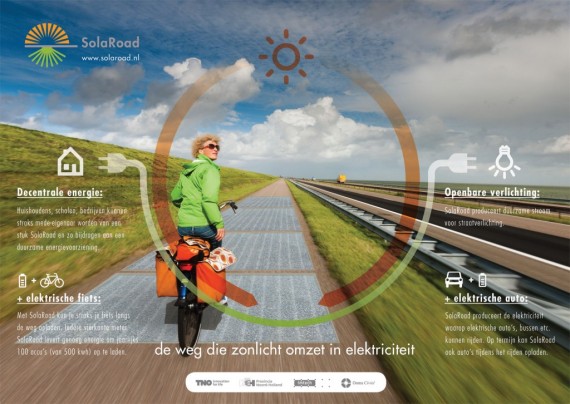 The solar bike path pilot cost about €3.5 million to design and build. The cost of the first test has been on the high side, but solar panels are declining in cost and first-run technologies are often costly for a number of reasons. Eventually, it may come to pass that there are more solar bike paths and some roads.