Solar energy accounted for 64% of all new electric generating capacity brought online in the first quarter of 2016 according to GTM Research and the Solar Energy Industries Association’s U.S. Solar Market Insight Report. In total, 1,665 megawatts of solar power were added between January 1 and March 31. The report also says that this year the solar industry will install an unprecedented 14.5 gigawatts of capacity. That’s a 94% increase over 2015. There are now more than a million operating solar PV installations across the country, representing 27.5 cumulative gigawatts of operating capacity. 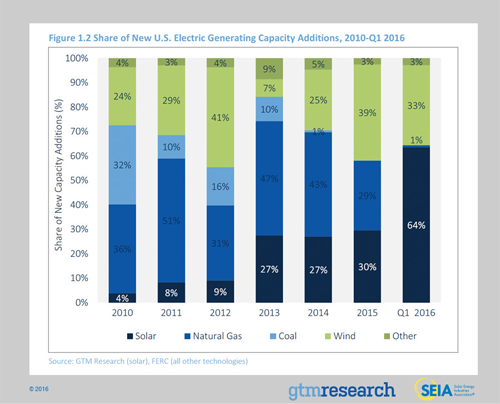 “While it took us 40 years to hit 1 million U.S. solar installations, we’re expected to hit 2 million within the next two years,” said Tom Kimbis, SEIA’s interim president. “The solar industry is growing at warp speed, driven by the fact that solar is one of the lowest cost options for electricity and it’s being embraced by people who both care about the environment and want access to affordable and reliable electricity.” Installations by utility companies are expected to account for three quarters of new capacity this year.

The U.S. Solar Market Insight report is the most detailed and timely research available on the continuing growth and opportunity in the U.S. The report includes deep analysis of solar markets, technologies and pricing, identifying the key metrics that will help solar decision makers navigate the market’s current and projected trajectory.

The recent extension of the federal tax credit for solar energy installations will allow the market to continue its growth into 2017. Previously, companies were racing to complete projects before those credits expired at the end of this year.

WTO Rules Against Solar Incentives In India Based On US Complaint

Las Vegas To Use 100% Renewable Energy