Opponents of the proposed Hinkley Point C nuclear power plant in Somerset, England, got something to cheer about last summer, when questions over funding brought a halt to preliminary work at the site. The delay gave solar energy advocates an opportunity to assemble more evidence that Hinkley C would result in a colossal shock for UK ratepayers compared to alternative sources. Though the project lumbered back to life last fall thanks to a massive investment by China, solar may have one last chance to make its case. 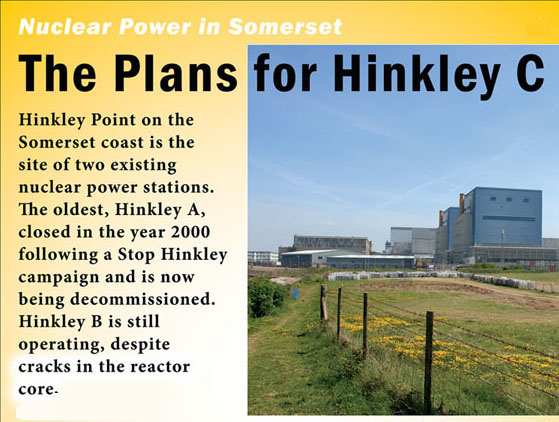 For those of you familiar with the movement away from nuclear power in some European Union countries (Germany and Switzerland being two examples), the Hinkley Point C project is a bit of a head-scratcher, given the rapid dropoff in costs for wind and solar energy. The cost of energy storage technology that complements these intermittent sources is also dropping rapidly.

In contrast, the cost of Hinkley Point C has been rising, partly due to the use of newly “enhanced” nuclear technology that has not been put into commercial operation elsewhere. Two other projects with a similar design are underway in Finland and France, both suffering from delays and cost overruns that have provided Hinkley opponents with more ammunition.

Last October, The Guardian estimated that 30 million electricity customers would be on the hook for at least £4.4 billion for the new nuclear power plant, with potentially £20 billion in government subsidies.

Around the same time, the UK’s Solar Trade Association also weighed in with an assessment of the damages. The STA solar power analysis is an interesting attempt to calculate how much subsidy solar power would need to achieve an electricity output equal to that of Hinkley Point C over its 35-year subsidy period.

STA points out that Hinkley C was awarded a “strike price” of £92.50 per megawatt-hour at 2012 prices, under a 35-year contract. The Guardian points out that’s twice the going market rate.

The analysis found that compared to an overall subsidy cost of £29.7 billion for Hinkley Point C, a total subsidy of only £14.7 billion would be needed for an equivalent output of electricity sourced from solar, including the solar facilities themselves, energy storage facilities, and other balancing mechanisms that complement solar power.

Among other issues besetting the much-delayed project, the almost complete lack of a domestic nuclear power supply chain in the UK means that aside from site work, much of the equipment will be sourced overseas. Here’s The Guardian explaining:

Also not helping matters much is the fact that the two similar aforementioned nuclear power projects that are already underway have been experiencing, to put it mildly, problems. Three well known nuclear energy advocates (as in, nuclear power = clean power) were so put off by the experience that they co-signed an op-ed opposing the Hinkley project last fall. They slammed the project in Flamanville, France, for massive delays and cost overruns (that project is six years behind schedule), and here’s what they had to say regarding the Olkiluoto project in Finland:

The design is so complex that at one point 5,000 workers were on site. The workers had to be drawn from all over northern Europe; communication problems have been so severe that different teams appear to have been building to different specifications.

Its costs have more or less quadrupled. Already the plant is bogged down in lawsuits, as the different contracting parties blame each other for the delays and costs.

While these two projects seem too far along in construction for the plug to be pulled, opponents of the Hinkley project still have a measure of hope left. According to one source (this one), the final details of the financials haven’t been worked out yet:

The agreement between EDF and China General Nuclear Corporation will enable construction of the UK’s first nuclear power plant in a generation.

With some pre-development work already complete at the Hinkley site, the construction project is due to start in earnest very soon, subject to a final investment decision.

It’s also helpful to keep in mind the experience of US nuclear opponents who rallied against the Shoreham nuclear power plant, built on Long Island in New York State in at a cost of $6 billion. They lost the battle but won the war, as the plant was completed by 1983 but never put into operation due to the lack of an evacuation plan in the densely populated New York City metro region.

Electricity customers on Long Island are still cleaning up after the mess in the form of higher rates, and since nobody wants to pay for the cost of dismantling the facility it has continued to take up real estate that could be put to other uses, providing a stellar demonstration of what not to do in terms of nuclear power planning.

As for Hinkley Point C, sometimes you just have to learn the hard way.