We don’t often think about water and electricity together, but there is a direct and important link between them. Traditional electric power plants use vast amounts of water to cool themselves. In fact, the US Geological Survey says power plants in the United States were responsible for 45% of total water withdrawals in 2010. 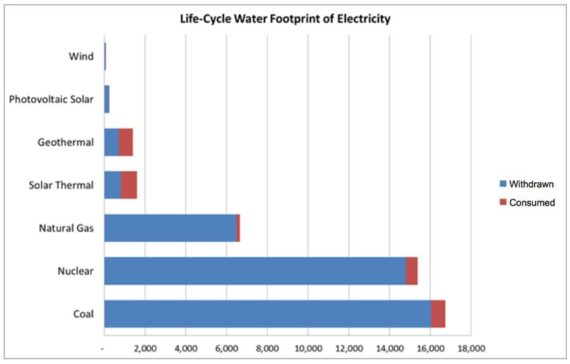 Contrast that to making electricity using solar panels. They don’t need water for cooling during operation. In fact, according to a report from the International Renewable Energy Agency (IRENA) in January, 2015, producing a unit of electricity with solar panels uses as little as 1/200th of the water used by a typical power plant.

While generating facilities use a lot of water internally, the fossil fuels they burn use even more. Natural gas may be touted as cleaner burning than coal, but extracting it from the ground in a process known as fracking consumes billions of gallons of water. A study by Duke University found that between 2005 and 2015, energy companies used nearly 250 billion gallons of water to extract shale gas and oil via fracking in the US. That resulted in about 210 billion gallons of wastewater. Much of that is injected back into the ground, where it pollutes aquafers that millions of Americans rely on for their drinking water.

Coal mining in the United States also uses a lot of water — more than 80 million gallons a day. The Environmental Protection Agency estimates that strip mining, which simply removes the top of mountains and dumps them into the valleys below has buried almost 2,000 miles of Appalachian headwater streams. The River Network, a water conservation organization, estimates that wind and solar panel technologies use the least amount of water to generate electricity.

Biofuels like ethanol aren’t the answer, either. Argonne National Laboratory calculates that each gallon of corn-based ethanol can require over two hundred gallons of water consumption. Add in the tons of fertilizer and pesticides — largely derived from petroleum — and biofuels exract a heavy toll on the world’s water resources. If you’re into saving water, driving a solar powered electric vehicle is a wise choice.

Solar power advocates want to lower carbon emissions from tradtional power plants that run on fossil fuels and that is critical to the fight against global warming but access to clean water is also important. There is only a finite amount of water available and it borders on stupidity to squander it on things like cooling genearting plants and wresting the last molecules of fossil fuels from the earth.

Just one more reason why solar energy is vital to the continued good health of the earth and its people.