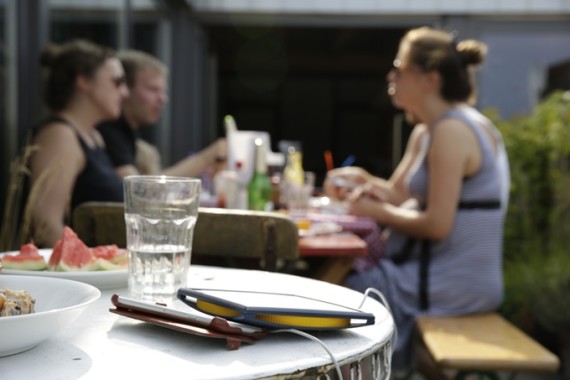 Why would such a campaign do so well? Many people seem to want to charge their phones from sunlight, and the Little Sun solar charger is small enough to fit in your hand. It is also very light and portable enough to easily carry, so you could charge your phone while sitting outside at a cafe or when you are taking a walk, riding a bike, or hiking.

Olafur Eliasson is one of the product’s co-creators, and Frederik Ottesen is the co-creator and engineer. Otteson described some of the charger’s technical aspects:

The device can apparently charge a phone from 5 hours of sunshine to a full charge. Users of mobile devices frequently are upset when their batteries get very low or die on them. Today, everyone knows how much they rely on these devices, so being able to maintain a charge throughout the day is very important. We rely on our devices during our personal and professional lives, so extending their usefulness is more than a matter of convenience.

In the first world, we might think of having a solar phone charger as something of a luxury, but there are people in other parts of the world who don’t have regular access to electricity. Having a mobile charger powered by sunlight would keep their phones operational, when otherwise they might be offline for long periods.

In fact, Olafur Eliasson explained that a previous product he created called the Little Sun Lamp has already been produced and has brought light to 670,000 people living off grid.

SolarCity Will Build World’s Most Efficient Solar Panels In America