We often report on enormous new solar power installations, facilities that generate megawatts of power. But solar can also bring important benefits to people even if it is just a few watts at a time.

The inspiration to bring solar power to Africans who live off the grid came to Xavier Helgesen a few years ago. On a business trip to Malawi, he decided to spend the night in a small city with 30,000 inhabitants. He was amazed to see the entire city was dark after the sun went down. People carried kerosene lamps at night. When a family invited him to dinner, they all huddled around one dim indoor light. 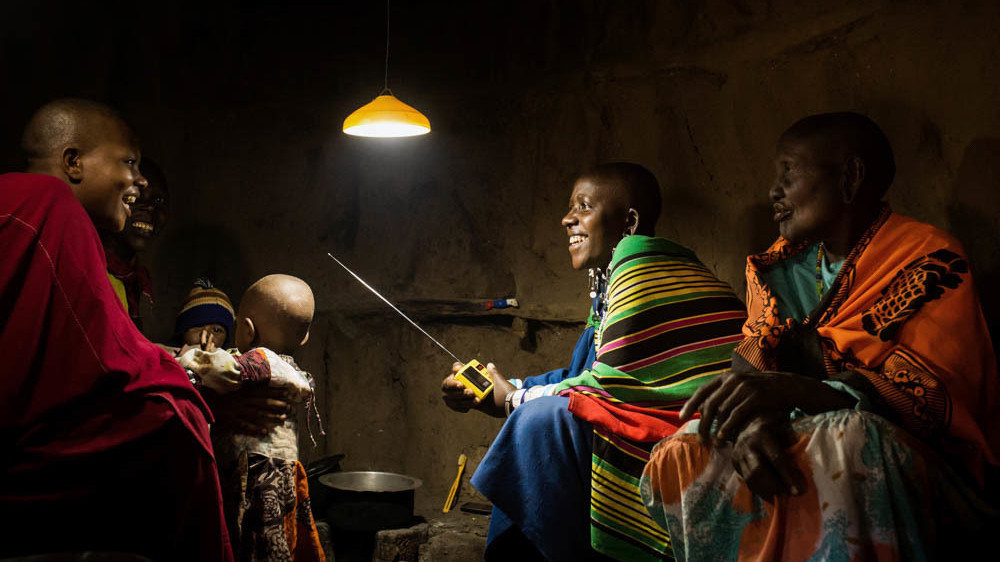 That’s when Helgesen got his idea to create solar-powered microgrids to serve Africans who had no access to electricity from the grid. Today, that includes about 75% of sub-Saharan Africa. He started Off-Grid Electric in 2012 with Erica Mackey, a classmate at the University of Oxford’s business school. To date, Off-Grid has reached more than 100,000 households and hired 800 workers in Tanzania. This year, it’s expanding to Rwanda. The goal is to reach 1 million homes in Africa by 2017.

When someone signs up for a system, there is a $6 fee to install solar panels on the roof and a meter to monitor energy usage. The panels power LED lights, a radio, and a phone charger. Then customers pay about $6 a month to access the power they need. That’s what they usually pay for kerosene for their lanterns. Those lanterns smell awful and contribute to respiratory illness when used indoors.

Citing the company’s “tremendous progress providing access to clean and reliable light and electricity,” USAID launched a $36 million joint Power Africa and US Global Development Lab effort this week. The money will be used to fund projects like Off-Grid Electric to 20 million households across sub-Saharan Africa.

The company itself has grown rapidly in the past year. Off-Grid has been a favorite for funders, securing $45 million from stakeholders in December 2015 to expand the company. And in January, it won the Zayed Future Energy Prize for its creative, “massively scalable” business model.

Lily Odarno, an energy associate at the nonprofit group World Resources Institute, says the key to Off-Grid’s success has been good timing and creativity. “There’s a unique opportunity right now in Tanzania. You have a conflation of a number of important factors — A largely rural population with a low electricity rate, the availability of solar technology, which has improved over time, and technologies to ensure people can pay for their services,” she says. “Off-Grid Electric tapped into their innovative approaches to reach people without electricity who live in rural areas.”

Off-Grid representatives don’t ask people how many watts of electricity they want to purchase. It asks them which appliances they want to use, then designs a package based on their specific needs. If they need certain devices not included in the basic service, Off-Grid can add those to the package, too.

For many of Off-Grid’s clients, their No. 1 wish is for electricity to run a phone charger, so a USB cellphone charger is included in the entry-level package. “Phone charging is a crucial application,” Helgesen says. “People can get by without lights, but not being able to charge your phone — there’s no substitute for that.”

Off-Grid customers pay for power as they use it, relying on mobile payment apps like M-Pesa. “Just like prepaid mobile throughout Africa and India, our customers pay us daily for the use of their solar system,” says Helgesen.

This week, Off-Grid announced a new program called “Kazi na Zola,” a collection of solar appliances like phone charging strips, entertainment systems, and hair clippers designed to help rural entrepreneurs generate income. “We give them a simple business plan,” says Helgesen. Off-Grid will teach them to run a phone charging shop, barbershop, bar, or restaurant. “We tell them: Here’s how many haircuts you have to do a day, phones you have to charge a day to pay for your system. Anything above that — that’s your profit.”

Microgrids and microbusiness. Exactly what most of the African continent needs.

Tesla’s SolarCity Acquisition Could Be Brilliant