Solar Power Could Provide 13% Of All Electric Power By 2030

IRENA, the International Renewable Energy Agency, says the share of solar power generated by photovoltaic panels worldwide could increase from 2% today to 13% or more by 2030. In a report entitled Letting In The Light and released at InterSolar Europe this week, IRENA predicts a massive expansion of solar power in coming years, driven by prices for solar electricity that continue to fall. 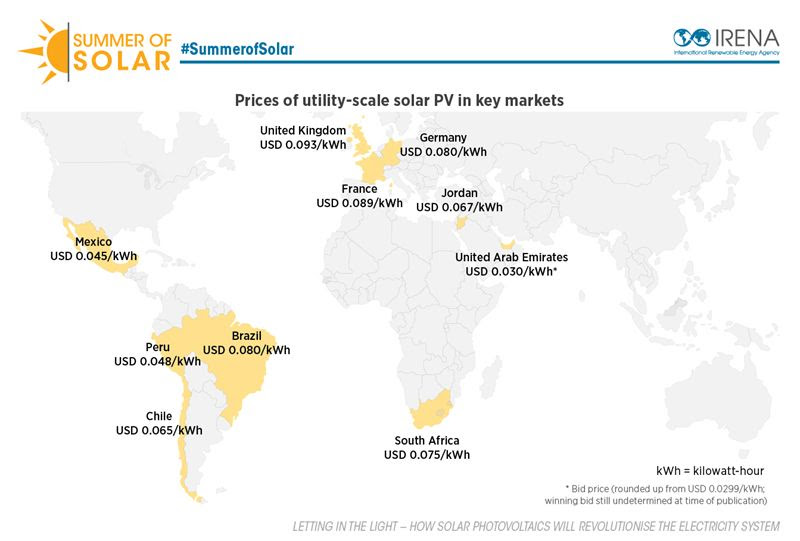 “Recent analysis from IRENA finds that cost reductions for solar and wind will continue into the future, with further declines of up to 59% possible for solar PV in the next ten years,” said IRENA Director-General Adnan Z. Amin. “This comprehensive overview of the solar industry finds that these cost reductions, in combination with other enabling factors, can create a dramatic expansion of solar power globally. The renewable energy transition is well underway, with solar playing a central role.”

IRENA estimates that solar capacity could reach between 1,760 and 2,500 gigawatts by 2030. That’s up from 227 gigawatts today. To put that in perspective, the entire electrical capacity of Africa today is only 175 gigawatts. To achieve that level of growth, the rate of solar installations will need to double every year between now and 2030.

But with electricity prices from PV sources plummeting, that sort of growth is fully achievable, according to IRENA. Solar PV electricity costs between 5 and 10 cents per kilowatt in Europe, China, India, South Africa, and the US today, 4.8 cents in Mexico and Peru, and 5.84 cents in the United Arab Emirates. Last month, a record low price of just 3 cents per kilowatt was established in Dubai.

Investment in solar PV now represents more than half of all investment in the renewable energy sector. In 2015, global investment reached $67 billion for rooftop solar, $92 billion for utility-scale systems, and $267 million for off-grid applications.
The solar power industry today employs 2.8 million people in manufacturing, installation, and maintenance — the largest number of workers of any renewable energy source. Solar generation has already reduced carbon dioxide emissions by up to 300 million tons a year and can increase to as much as three billion tons by 2030.

“World electricity demand is expected to grow by more than 50 per cent by 2030, mostly in developing and emerging economies,” said Mr. Amin. “To meet this demand while also realizing global development and sustainability goals, governments must implement policies that enable solar to achieve its full potential.”

The report highlights five recommendations that can help achieve such increases. They are:

Earlier this week, IRENA released another report entitled End-of-Life Management: Solar Photovoltaic. It finds that recovering materials from retired solar PV panels could become a $15 billion a year business opportunity in the near future.

Solar Leaders In Universities, In The Air, & In The Solar Industry