A solar power tree developed by the Central Mechanical Engineering Research Institute of India is designed to capture rays from the sun using an innovative vertical arrangement of solar cells. The solar tree uses steel “branches” to hold multiple solar panels high off the ground where they are exposed to more of the sun’s rays. The array can be reoriented during the day to stay facing toward the sun, which increases output by an additional 10%. 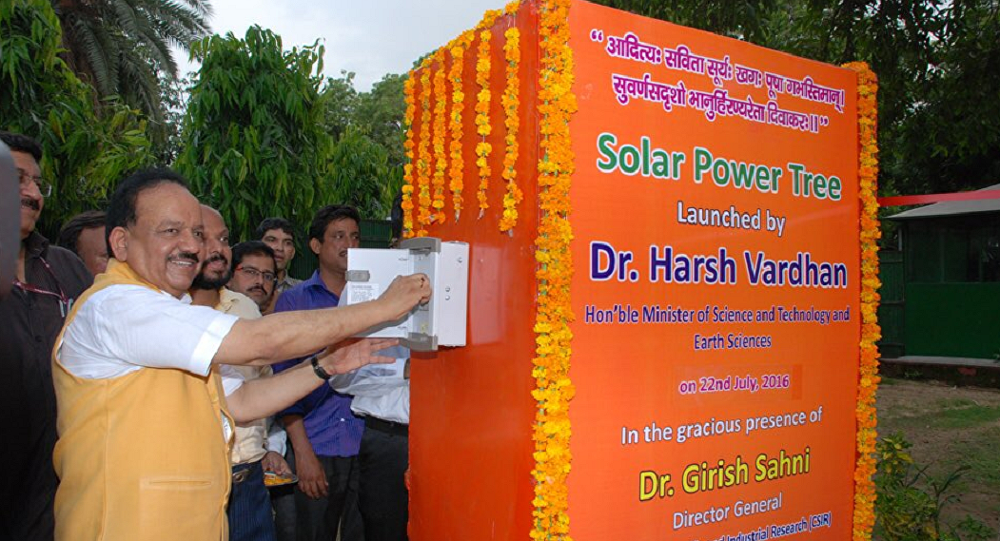 “The Solar Power Tree addresses the challenge of increasing demand for green energy by utilizing scarce land resources in the country,” says Dr. Harsh Vardhan, Minister for Science and Technology and Earth Sciences. Dr. Vardhan further adds that, “In order to produce 1 MW of solar power, 3.5 acres of land were needed for conventional solar panels layouts. Therefore, for any state in the country to survive on green energy, there will be requirement of thousands of acres of land. Acquisition of land is a major issue in itself.”

The advantage of the Solar Power Tree is that it takes only 4 square feet of land to generate 5 kW of solar power, whereas a conventional layout requires 400 square feet of land,” says  Dr. Girish Sahni, Director General of CSIR. He adds “the device has been functioning effectively at three places in West Bengal as a pilot project.”

With its enormous population, India has little available vacant land for traditional solar panel arrays. It also has very few single family homes that have rooftops suitable for solar power. Any technology that can squeeze more electrical energy out of less space can be vitally important to meeting the countries clean energy goals.

India, like China, its neighbor to the north, has been dependent on coal powered generating plants that spew massive amounts of carbon pollution into the atmosphere. China is aggressively pursuing a switch over to solar power, but it is able to site most of those facilities in uninhabited areas such as the Gobi Desert. India does not have the luxury of such expanses of available land.

What Will Elon Musk’s Master Plan Part 2 Mean For The Utility Industry?