A containerized PV solar system with energy storage in the form of lithium-ion batteries has been be installed at Liberty State Park in New Jersey. The Eco Power station concept was unveiled in 2015, and a press release said the PV solar system capacity is 5 kilowatts. They system includes backup electricity generating capacity from a hydrogen fuel cell which can provide power for 8 hours or more. The entire system consumes no energy from the grid.

A smart-energy-management system is included in the container system, which is made by Taiwan-based Skynergy. Recycled tires and computer parts were used for the floor tiles and luminaries. The containerized solution is appropriate for usage where there is no grid-connected electricity, like for emergency situations or disaster relief. It can also be used for residential, retail, or recreational purposes.

A bicycle rental and tour company called Bike And Roll operates the 40 by 8 foot shipping container Eco Power electric bike station. The company offers tours in various locations in New York City and in other parts of the country, like San Francisco. The Liberty State Park site is well situated for views of Manhattan, the Statue of Liberty and the Hudson River. 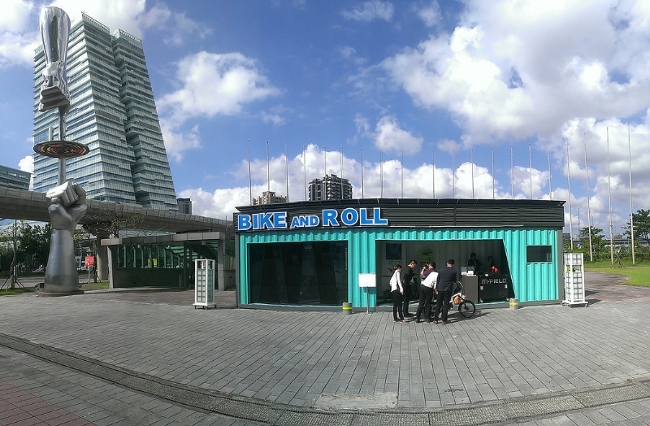 Considering the very large number of tourists who visit, having a solar electric bike station there just might prove educational too. One source says the 1,212 acre park receives about 4 million guests per year. Even if a tiny fraction of them visit the EcoPower station, surely some will be interested and learn a thing or two about clean energy.

On July 12th, a ceremony was held to officially hand over the EcoPower station. The participants included the Green Trade Project Office; the Taiwan Economic and Cultural Office in New York; Bike And Roll; Taiwanese manufacturers; and the project partners UL and Asolar.

The Taiwan Green Trade Project Office was established in 2011 to promote Taiwan’s green products and services, and is within the Ministry of Economic Affairs.