Many people (including myself) have probably wondered something like the following: with solar panels becoming so cheap, why can’t we all put panels on our roofs and go 100% renewable? The obvious answer is that nobody would have any electricity at nighttime.

But the issues involving the integration of photovoltaic solar into the grid are more subtle than that. As an outsider to the industry, I struggled to understand how California could be having grid problems (i.e. the “Duck Curve”) when they were only at 6% or 7% solar. After all, 7% is a long way from 100%! I set out with some markers and some graph paper and had an “aha” moment.

Let’s start with a couple of terms which are easy to confuse with one another. The first is electrical generation capacity. Capacity is defined as the total amount of power a fleet of generators could provide if they were all running at 100% power all of the time. Obviously, this scenario never happens, because it would leave absolutely no margin for error. Nonetheless, you will often see power plants referred to by their capacity.

As an example, nuclear plants are the ones that run closest to capacity, whereas simple cycle gas “peaker” plants generally run much less than their capacity because they are only running at selected “peak” times. 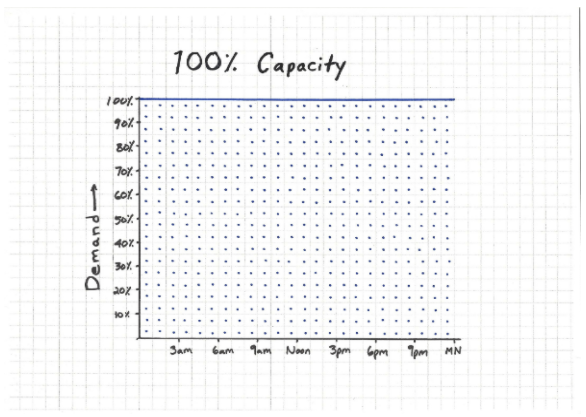 On the flip side is the amount of electricity that the power plants actually do produce on a given day, which is termed their electrical generation. So, you have capacity on one hand and generation on the other. Typically, an electrical generation system generates somewhere around 70–80% of its capacity. This, of course, varies day by day.

In Figure 1, I have imagined as if all power plants are running as hard as they can all 24 hours. I represented the total amount of electrical power produced with dots. For those so inclined, let’s say that this pretend power grid has a capacity of 20 megawatts. Therefore, each box on the vertical axis represents 1 megawatt. Each box on the horizontal axis represents 1 hour. Taken together, this means that each little box (and each little dot) represents 1 megawatt-hour. As there are 20 boxes vertically and 24 boxes horizontally and 20 x 24 = 480, this means that this grid’s capacity is 480 megawatt-hours (and there are 480 dots). 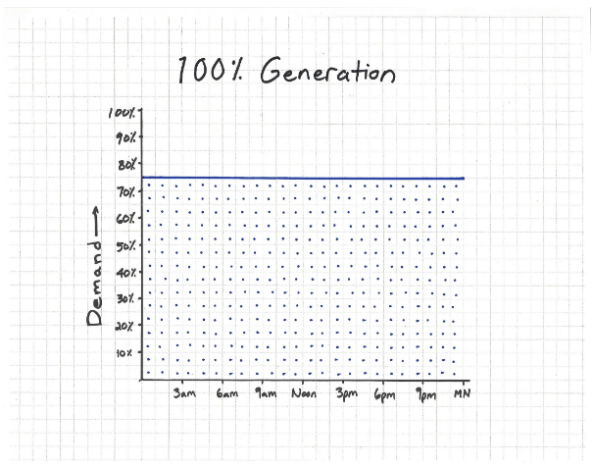 In Figure 2, I have assumed for this thought experiment that the amount of power actually produced (i.e. generated) was only 75% of the capacity. 75% is around average, but remember it can vary day to day. Our generation graph has 15 dots going up and 24 across, so it has 25% fewer dots than in Figure 1, for a total of 360 dots.

The electrical output from solar panels is nearly always described in terms of generation. After all, it’s not like the sun can shine on them 24 hours a day. Also, we don’t control things like clouds and rain, so it is not particularly meaningful to discuss the capacity of a solar panel array. Therefore, I will use only generation from here on out. 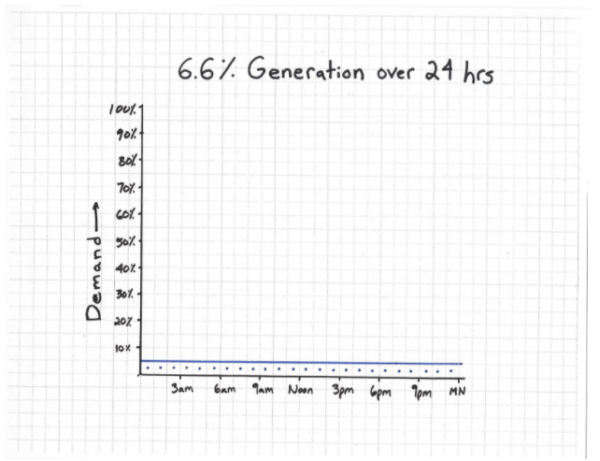 In Figure 3, I have represented 6.67% Generation. Why 6.67%? 360 dots x 0.067 = 24 dots, which looks real nice on the graph. If you had a power plant running at a constant rate that generated 6.6% of the grid’s power for the day, Figure 3 is what that power output would look like. But solar panels do not generate power at a constant rate.

Now some magic (okay, not really) — what happens if you have a power plant that produces 24 dots of power but only does so over 18 hours? 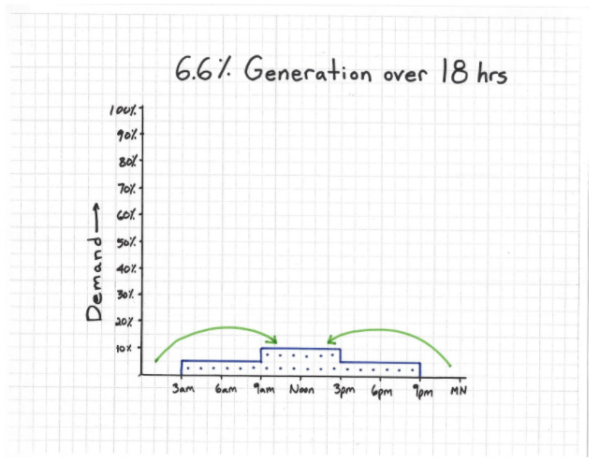 In Figure 4, there are still 24 dots, but I have “squished” the 24 dots into 18 hours instead of 24. As you can see, I have drawn some little green arrows showing how some of the dots had to move inward and stacked them toward the middle of the day. Next, let’s squish that 24 units of power even more — this time down to 8 hours: 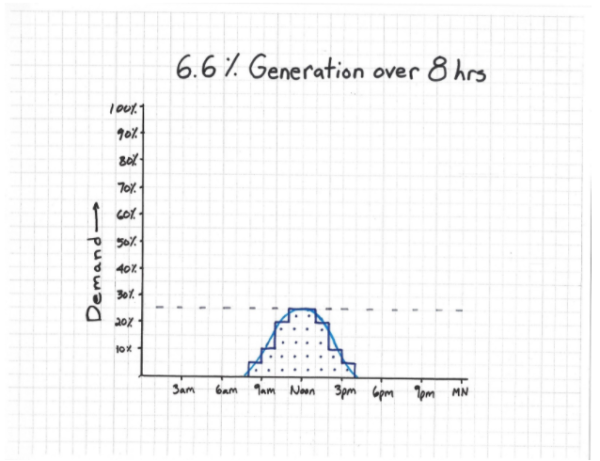 Still 24 dots here. Count them. I dare you. Now you can see that we’re getting something very close to what Solar generation looks like — a bell curve of output centered around midday (see the light blue line). Even though this figure is still only of 6.6% generation, at its peak, solar is providing 25% of the capacity of the system! Squishing something that was 6.6% overall from 24 hours down into 8 hours makes a huge difference for how the grid deals with that electrical generation. 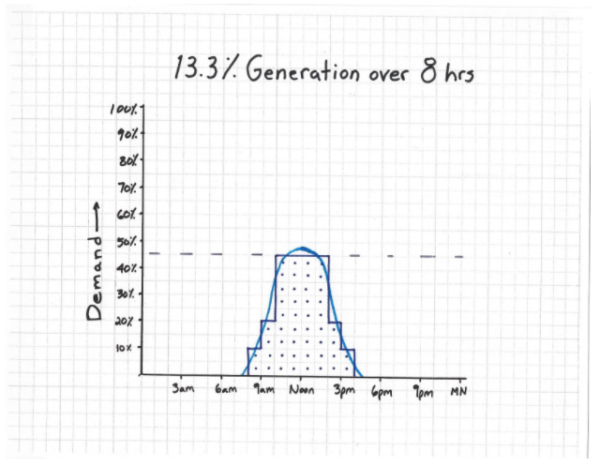 In Figure 6 things get even crazier. I doubled the generation from 6.6% to 13.3%, which means there are now 48 dots. When the 48 dots are squished into 8 hours, solar peaks at 45%! Grid operation is beyond the scope of this article, but I don’t think it takes much to see that turning massive power plants way down and then way back up just a few hours later (as would be required above) could be quite problematic. 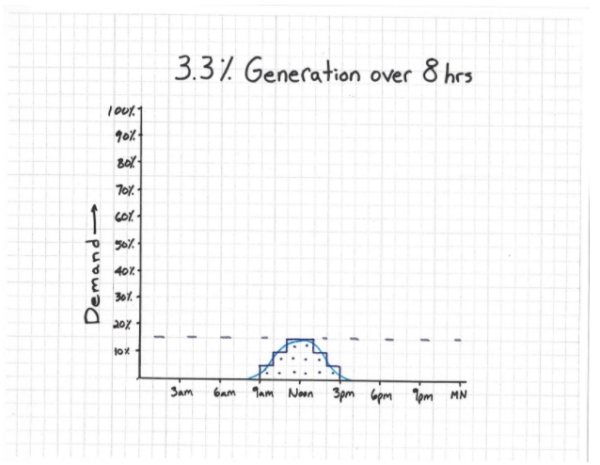 When I was learning about the California Duck Curve issue it seemed crazy to me that what at first glance appeared to be a fairly small percentage of solar power could have such a major impact on the grid. However, laying it out on graph paper like this with my daughter’s markers made it so much clearer to me, and I hope to you as well.

About the Author: My name is Casey Moothart and I am a Primary Care Physician, husband, and father of two living in Cincinnati, Ohio. I have no connection to any electric industry nor governmental agency. I do not have any significant relationship with anyone in the Electrical Utilities, nor in the Solar Panel or Home Battery Industries. So why do I have this website? At a certain point my wife and I decided to call Cincinnati home for the long haul and started to look into building a new home. We were fortunate enough to find an ideal lot and build a very energy efficient LEED Gold home, which was completed in 2015. We really went for it in terms of energy efficiency, and initial, y my idea was to go “net zero.”  But then…

Inspired in part by Michael Pollan’s “Ominvore’s Dilemma,” I started trying to trace Cincinnati’s electricity back to its sources. With a little research I found that approximately 68% of my region’s electricity was coming from coal. So I read up about the kind of coal plants we have in the area, learning that they are sluggish to respond to peaks or valleys in demand, taking hours or even days to change their “speed.” So that lead me to wonder… if we were to put solar panels on our roof here in Cincinnati, how much CO2 would we actually be offsetting during the time that the panels are making electricity? And would a home battery be better? My website, WhyHomeBatteries.org is an attempt to address these questions.