Virunga National Park is located in the Democratic Republic of Congo (DRC) near borders with Uganda and Rwanda. It was established as the first national park in Africa in 1925. Now a UNESCO world site, it is the most biologically diverse protected area on the continent and is home to the world’s last remaining mountain gorillas. The park was a top tourist destination until the Congo Civil War destroyed much of its flora and fauna. 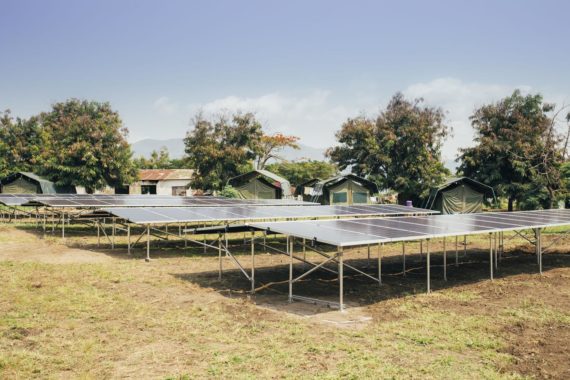 Today, a small group of park rangers struggle to protect the gorillas from poachers and safeguard the natural resources in the park. Locals cut down the trees located in the park to make charcoal to sell for cooking. This black market energy business continues to decimate the habitat of the endangered gorillas at an alarming rate.

The work of the rangers is made more difficult because the three stations within the park are far from the nearest electrical grid. All of the electricity they need for lighting, cooking, and communication has to come from diesel generators — a poor choice for such an ecologically fragile area. Not only is diesel power dirty, hauling diesel fuel for the generators is arduous and dangerous work. More than 175 people were kidnapped along the main road to the park last year.

GivePower, a nonprofit organization founded by SolarCity, selected five of their engineers who volunteered to install solar microgrids at all three ranger stations. The project took 4 months to plan, because the team was anticipating all the equipment and tools they would need for the task. But of course, once they got onsite, few things were the way they expected them to be and they had to improvise. In the end, the team says the systems they came up with were better than the ones they designed back home in the comfortable confines of San Rafael, California.

The plan was to install 200 solar panels, 7 Tesla Powerwalls, 7 SolarEdge inverters, along with lights and plugs for dozens of buildings. In order to complete the project on time, they hired and trained local electricians and construction crews. 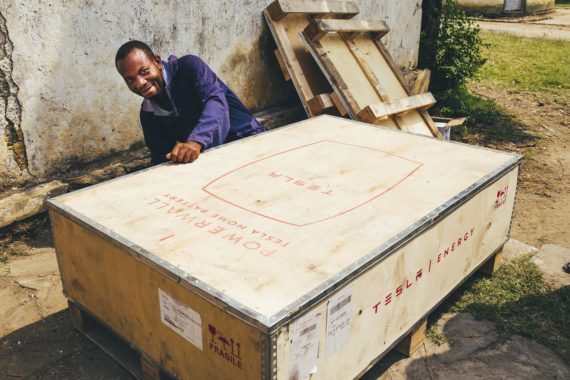 After three weeks in Virunga, all three solar micro grids were successfully installed. Now, the park rangers have reliable lighting, communication systems, computers, radios, and GPS units. That means they no longer need to risk their lives to bring in diesel fuel and can more effectively protect the park and its denizens from thieves and poachers.

SolarCity is in the news all the time, but the humanitarian contributions made by their foundation, GivePower, are given less recognition. Kudos to SolarCity and GivePower for bringing the benefits of solar power to some of the most deserving people on earth. This post iss based on a riveting story written by one of SolarCity’s engineers, Joe O’Connor, who wrote about his experiences during the three week installation process. Click here to read more.

The solar microgrid project in Virunga National Park was made possible thanks to Empowered By Light Foundation in collaboration with the Leonardo DiCaprio Foundation and SolarCity’s GivePower Foundation. To learn more about Virunga National Park and the important work the rangers who work there are doing, you can watch a documentary on the park that is available on Netflix.