SolarCity and Tesla are teaming up to create turnkey residential power backup packages, according to a press release from SolarCity. Tesla announced its new Powerwall battery storage product to much fanfare last week. It is based on the lithium-ion battery technology that Tesla and its battery partner, Panasonic, use to power Tesla’s current and upcoming electric automobiles.

The Powerwall is available in two sizes — a 7 kWh version for daily cycling priced at $3,000 and a 10 kWh model for weekly cycling priced at $3,500. Those prices are about ⅔ lower than many analysts predicted and indicate that Tesla has indeed accomplished a significant decrease in the cost of its batteries thanks to the economies of scale that occur when it builds more and more of its energy storage devices. For a more detailed comparison of the Powerwall and competitors, see this in-depth CleanTechnica piece.

Battery storage is expected to fundamentally change the electricity industry in virtually every country around the world in the coming years. Those changes will have a significant economic impact on conventional electric utilities and the energy grid that connects them. There will be financial winners and losers because of it.

An electric utility is a business like any other. Instead of selling shoes or cars, it sells electricity. If it sells less, it makes less money and that makes utility company management and shareholders unhappy.

As the cost of solar panels has plummeted over the past 10 years, the number of rooftop solar systems and solar farms has exploded. Today, electricity from solar costs less than electricity made from coal, oil, natural gas, or nuclear power in many places.

In virtually every state in the US, electric utilities are granted monopoly status. Historically, it would make no sense to have 11 different electric companies in one area, all fighting for business. In exchange for this protected status, utilities are guaranteed a fixed return on their investment. That way, they can sell bonds to the public to raise the money they need to build new power plants and maintain the electrical grid.

Renewable energy from solar panels and wind turbines is truly “disruptive technology.” If everyone can make their own electricity, who needs utility companies at all? The hitch has been that to store that electricity and use it later has been quite expensive, meaning that solar power owners need the grid.

Some utility companies like Pacific Gas & Electric have embraced the changes in the marketplace, albeit as a result of prodding from state regulators. It now gets more of its electricity from solar panels than any other utility company in the US. But many others are frightened by the coming changes and have gone running to state legislatures and regulators demanding protection for the status quo. No doubt, Conestoga wagon manufacturers and buggy-whip makers did the same thing a century ago.

Besides cutting into the amount of electricity utility companies sell, solar power has a powerful impact on the electrical grid — that massive collection of poles, wires, transformers, and sub-stations that connects utility companies across North America. If people and businesses can make their own power locally, who needs a grid? For now, many do, and utilities have used that to delay rooftop solar connections, fight for taxes and fees on solar power, etc. At a certain point, the solar competition can really cut into utility profits, after all.

The Rise Of Microgrids

Up until now, the fight between utilities and customers has largely been over how much utilities have to pay for excess electricity fed back into the grid. In essence, people with solar panel systems make electricity during the day when demand in their homes is low but overall grid demand is high. That electricity gets sold to the local utility, sometimes at relatively high daytime prices (but often at the average retail price of electricity). When people get home from work, they buy electricity back from the utility companies — in the late evening, that can be at much at lower prices if the utility offers time-of-use pricing. In effect, the grid acts as great big battery, sucking up all the available power during the day and giving it back at night. 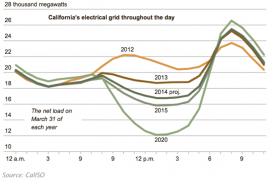 The biggest problem for utility companies has always been that the demand for electricity varies quite a lot during a 24-hour period. It’s high during the day but really spikes between the hours of 5:00 pm and 7:00 pm. That’s when people get home from work, turn up the air conditioner or turn on the heat, cook dinner, heat water, and power up their computers and televisions.

After 11:00 pm, demand falls off sharply and stays low until the next morning. If you plot out demand over time, the result looks very much like a duck, with the highest demand hours forming the head.

Add battery storage to solar or wind power and you have a microgrid, which is exactly what the name implies — a self-contained system that makes and stores its own power. Add in the Tesla Powerwall and now, instead of selling power to the grid and buying it back at night, residential and commercial customers can make their own power, store it, and use it for their own purposes whenever they need it.

Hook a bunch of microgrids together with computer controls and you can manage several power systems and storage batteries in such a way that the available power is used in the most efficient way possible. A microgrid opens up unlimited possibilities for community solar arrangements. In some areas, institutions like churches and schools with large roofs can provide solar power for apartment-dwellers or low-income families who have no access to inexpensive solar power.

A managed microgrid can also help level out the duck curve by storing power during the day and making any excess available during periods of high demand (and high retail electricity prices).

Electrical generators are most efficient when they operate at constant speed. Shutting a generator down and powering it up later costs utility companies money. Being able to draw from hundreds, thousands, or even tens of thousands of storage batteries instead could also save utilities money.

Microgrids can save utilities money in another way, too. It often costs less money to interconnect many microgrids than to build a complex electrical grid powered by a massive generating facility located at the center and serving everybody in an entire geographical area.

The news from Tesla is about more than home storage, as you might have gathered by now. Its Powerwall will serve the needs of residential customers, but it also is marketing larger batteries it calls Powerpacks to commercial customers like Walmart and Target. The Powerpack can also service wineries, colleges and universities, and government installations.

The third part of the Tesla energy storage plan calls for grid-scale batteries capable holding up to 12 megawatt-hours of power. (A megawatt-hour is 1,000 times more energy than a kilowatt-hour.) The scale may be quite a bit larger than the home system but the concept is the same — store less expensive energy now for use later when rates are highest. Make the grid we have as efficient as possible to keep electricity rates for everyone as low as possible.

Other Companies Are Joining In

A number of other companies both in the US and overseas are partnering with Tesla to bring battery storage technology to customers large and small. Sunrun, the largest dedicated residential solar company in the US, will offer the Tesla Powerwall batteries to its solar customers.

“We believe the next evolution of solar as a service is home solar paired with storage and we look forward to adding Tesla and its new energy storage for consumers to our extensive line of battery offerings,” said Paul Winnowski, Sunrun’s chief operating officer. “This partnership builds upon Sunrun’s approach to grow consumer adoption of home solar through a variety of channels and partners.”

LichtBlick is a German company with a strong internet technology component. It will use the Tesla Powerwall for residential customers and integrate all those installations digitally.

“The new Tesla Powerwall represents a milestone, since powerful, affordable batteries are a key technology in the distributed energy revolution,” said LichtBlick founder and CEO Heiko von Tschischwitz. “LichtBlick connects decentralized batteries to a powerful storage system. The optimized use of millions of installed batteries, outside of buildings as well, plays a key part in ensuring that decentralized energy shapes our energy supply system.”

Building For The Future

The sunlight that hits the Earth every day contains enough power to meet the energy needs of every person on Earth for an entire year. According to the SolarCity blog, its ultimate objective, along with corporate cousin Tesla, is to harness that power and make it available to all at the lowest possible cost. Elon Musk made reference to this dream at the introduction gala for the Powerwall when he said this technology could bring the blessings of electric power to billions of people who are without it today.

But make no mistake. The PowerWall is a beginning, what John Glenn would call a “small step.” The power rating for the 10 kWh PowerWall, according to the company, is a paltry 2 amps. That’s barely enough to run a hair dryer, never mind an entire household. True, up to 9 of the units can be networked together for more storage ability, but that obviously will cost 9 times the minimum $3,000 price.

Also mentioned only in passing is that the Powerwall does not include an inverter. Nor does the price include paying a professional electrician to install it in accordance with all local building codes. Buried in the fine print is the information that the total cost of a Powerwall plus inverter plus installation is estimated at $7,340 if bought outright from SolarCity, or $5,000 for a 9-year lease.

But Elon Musk is not one to think small. Or talk small, for that matter. His mantra is “economies of scale.” He is building the world’s largest battery manufacturing facility — modestly called the Gigafactory — outside of Reno, Nevada. In what amounts to a chicken and egg scenario, the more batteries Tesla makes, the cheaper each one will be. And the more batteries Tesla and SolarCity and Sunrun and Edison Energy and LichtBlick sell, the more batteries Tesla will make. Furthermore, Tesla’a Powerwall does seem to be the most competitive such product on the market for homes and small businesses, if not utilities.

It’s all sort of a self-fulfilling prophecy. Realistically, it will be a decade or more before the dream is fully realized. Are we willing to forgive Musk a bit of super-salesman flimflamery to see his vision come to fruition?