In the company’s first quarter-2016 financial earnings report (Q1’16), SolarEdge reported record revenue of $115.1 million, up $16.9% on the quarter-previous, and up 71.8% year-over-year. The company shipped 356 MW (AC) of solar inverters during the quarter, which according to PV-Tech equates to 1,460,000 power optimizers and 54,000 inverters, with North America remaining the company’s largest market, receiving shipments of 232 MW.

“We are very satisfied with another strong quarter of record revenues and improved gross margins,” said Guy Sella, Founder, Chairman and CEO of SolarEdge. “In addition to our very positive financial results, this quarter we introduced our new HD Wave inverter topology, demonstrating our technological leadership in the market. We are confident that our global presence and expanded product offering position us well for continued growth.” 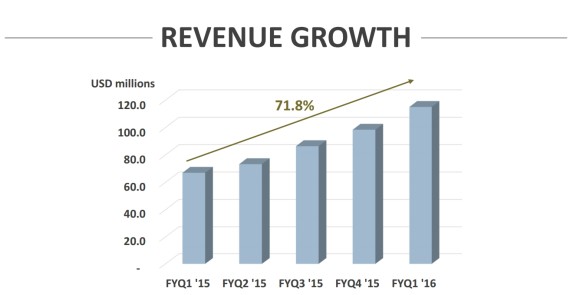 SolarEdge’s net income was up this quarter as well, increasing to $14.4 million from its previous $9.3 million, and $2.5 million a year earlier. Earnings per share also benefited from a strong quarter, reaching $0.32, up from $0.21 in the previous quarter, and up from $0.00 year-over-year.

Guidance for the company’s second fiscal quarter stands at expected revenue in the range of $118 million and $121 million, and gross margins between 28.0% and $30.0%.

This is at least the third quarter in a row that SolarEdge has managed to achieve record revenue, after managing the same in both its third and fourth quarters during its 2015 fiscal year, which ended on June 30. These record quarters helped push the company to a yearly total of revenue of $325.1 million — a 144% growth over the year previously — and shipments of 920 MW.