Sungevity Gets $70 Million In New Financing From E.ON, GE Ventures, & Others 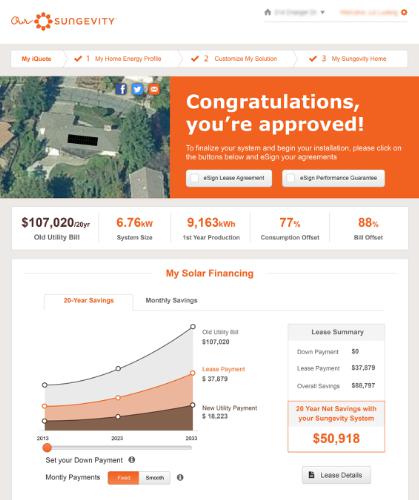 It seems that all of the solar financing companies have been completing big financing rounds lately. We just covered a new funding deal for SunPower and then got news of one for Sungevity.

Sungevity has just raised $70 million in new equity financing, with cash coming from new as well as existing investors. Jetstream Ventures, E.ON, and GE Ventures are some of the big investors in this round.

The financing is for continued growth in multiple countries. A press release about the news states: “The company’s U.S. sales doubled in 2013, fueled by proprietary remote solar design and instant quoting technology, as well as strategic business partnerships. Sungevity’s business interests in the Netherlands and Australia, launched in Q4 2011 and Q2 2012 respectively, also are scaling rapidly.”

“With E.ON and GE Ventures as equity investors, the Sungevity coalition now includes the world’s largest investor-owned utility company, the company that built much of the planet’s power infrastructure and one of the world’s largest retailers,” said Andrew Birch, Sungevity’s Chief Executive Officer. “That lineup combined with our customer-centric technology platform and the capitalization from this investment round, positions Sungevity to be the leading global solar brand.”

Frankly, if Sungevity were on the stock market or if I were a large investor, I’d be looking to invest in the solar pioneer. I think the company has a very bright future. Despite not being the largest solar service company out there, it is one of the largest, and it has some clear competitive advantages. It’s also doing good work expanding into other countries, which I think will serve it well in the long term (well… in the long term and in the short term).

“E.ON is in the business of servicing energy customers across several countries, and as new, more customer-centric solutions around residential solar arise, we want to provide our customers with the best solutions available,” said Susana Quintana-Plaza, Vice President, Technology & Innovation/Strategic Co-Investment at E.ON SE. “Our capital investment in Sungevity’s technology and customer-centric platform is a significant part of this.”