In a series of recent updates, Sunrun announced more evidence that it is expanding — and rapidly. In a press release and corresponding blog post for its customers, Sunrun excitedly shared that it hit a milestone 100,000 residential installations. I’m excited to be a part of its customer base that is “Creating a Planet run by the Sun” via my solar installation, which was done by Sunrun acquisition REC Solar (the installer, not the PV panel maker), and I have enjoyed having their system operate flawlessly since installation in 2011. Check out the video announcing the great news embedded at the bottom of this post. 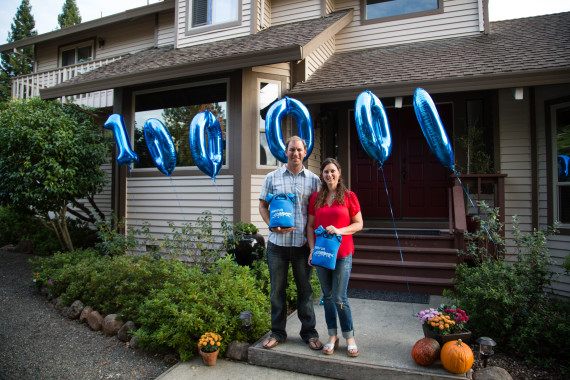 When Sunrun first started back in 2007, panel prices were much higher, and it has built its customer base and company on hard work and direct sales. From its blog post:

“When Ed Fenster and I founded Sunrun in 2007 many told us Sunrun wouldn’t last—that investing in solar technology and pioneering solar-as-a-service was way too risky. We knew Sunrun’s success wouldn’t happen overnight—that it would take patience and hard work to change minds. In the early days of Sunrun, I sold solar directly to homeowners at county fairs and farmers markets. Today, we have nearly 3,000 employees and over 60 Sunrun partners advancing home solar adoption nationwide. Our mission of creating a planet run by the sun gets closer every day.”

Supporting its growth on into the future, Sunrun is also expanding its supply chain, announcing that it is adding 7 new warehouses in a very short 4-week period. I’m sure it feels shorter for them as I recently supported a major supply chain upgrade and it requires close coordination across many functions — especially on a timeline like this. Specifically, Sunrun is adding warehouses in Baltimore, MD; Bakersfield, CA; Marlton, NJ; Hartford, CT; Somerset and Stockton, CA… and one more yet to be announced.

What’s fun about the way Sunrun is upgrading is that it is blogging the experience of what it is calling its “Build Bonanza.” It’s a great way to keep current customers and future customers engaged in the work they’re doing and to be a part of SunRun’s exciting growth.

Kyle Field I'm a tech geek passionately in search of actionable ways to reduce the negative impact my life has on the planet, save money and reduce stress. The more you know, the less you need.