Founded in 2007, Sunrun has made it a priority to make going solar a simple proposition for its customers, making rooftop solar customizable with their lifestyle and savings goal. Subsequently, with 100,000 customers now under its belt, Sunrun has helped customers — who together have generated more than 1.3 terawatts of clean electricity — save more than $100 million on electricity bills.

“Sunrun is proud to have helped over 100,000 customers enjoy the benefits of clean solar power and pay less for their electricity,” said Lynn Jurich, chief executive officer of Sunrun. “We strive to create an excellent customer experience to earn and keep our customers’ loyalty, and we look forward to helping even more families make the switch to solar and save money.” 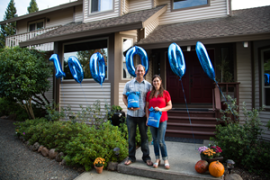 “In what seems to be a sea of solar providers, I was having a difficult time finding one that met all of my family’s needs,” explained Ken Noren. “Prior to meeting with Sunrun, I had met with three different companies – all very different in price range, levels of support, and understanding of the product they were selling.”

“The two most important things that set Sunrun apart from the others was their ability to customize a solar package for what we needed, not what they needed, and their thorough understanding of their products – their ability to answer questions directly, intelligently and in a timely manner. Based on their professionalism alone I would highly recommend them to anyone interested in having solar installed on their home.”

With third quarter financial earnings just around the corner it will be interesting to see whether Sunrun has managed to keep its strong growth from the second quarter as it has obviously continued to expand its customer base. In its second quarterly earnings report for 2015, Sunrun revealed that it had finished the second quarter with approximately 87,000 customers.