The Tesla battery storage plan is set to be revealed. Investors and stock analysts were informed this week via an e-mail from Jeffrey Evanson, Tesla’s head of investor relations,  that the company would be announcing a home storage battery and a “very large” utility scale battery product on April 30. According to Bloomberg News, the e-mail also said the the company “will explain the advantages of our solutions and why past battery options were not compelling.” 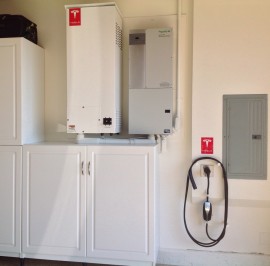 Reports have surfaced recently on the internet that Tesla has been testing its home storage battery for several years. According to one homeowner in California, the Tesla battery in his basement:

Reportedly, the residential battery is connected to the internet and can be controlled from a smart phone. It can charge from the grid, from solar panels or a local generator. Once charged, it can meet the electrical needs of the home or send power back into the grid.

Tesla is building an enormous facility in the desert outside Reno, Nevada in partnership with Panasonic to produce lithium ion batteries for Tesla cars and presumably for residential and grid electric storage use as well. The GigaFactory, as it is called, is due to open in 2017, but early reports suggest it may begin limited operation before the end of 2016. Founder Elon Musk is relying on mass production and economies of scale to reduce the cost of lithium ion batteries, rather than new breakthroughs in battery technology.

But other companies have different ideas. Aquion Energy has a line of non-polluting storage batteries that use salt water as their electrolyte. Their Aqueous Hybrid Ion (AHI) batteries use no hazardous materials, are 100% recyclable and are said to cost less than traditional lithium ion batteries. The batteries were recently awarded Cradle To Cradle Bronze status for their sustainable composition and manufacturing techniques.  The AHI batteries require no heating or cooling, which makes installation easier and further reduces costs.

Battery storage for electricity, whether on a residential or a grid scale basis, is set to substantially disrupt the traditional electricity generation and distribution system. Some observers, like the Rocky Mountain Institute, suggest that battery storage will lead to a 50% decrease in the demand for electricity from traditional sources within ten years. Tesla intends to play a major role in that transformative process.

Aquion AHI Battery First To Be Cradle To Cradle Certified

50% Say Solar Power Is Important To The Future of Energy