Since the CES 2017 show was in Las Vegas last week and a lot of people were flying in from around the world to attend, Tesla decided it was a good time to have an open house at its Gigafactory outside of Reno. The event was partly designed to give investors and analysts something to talk about other other than the company’s so-so fourth quarter performance. 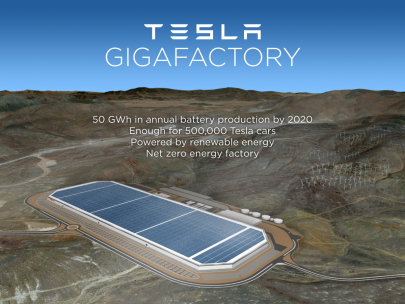 As part of the presentation, Tesla distributed a document from its investor relations department announcing that it plans to install a 70 megawatt solar array on the factory’s roof when the building is completed. Tesla claims it will be the largest rooftop rooftop solar installation in the world and seven times larger than the next biggest rooftop solar system. A copy of the document was obtained by Electrek and confirmed by The Verge.

In an address to engineering students at the University of Nevada in October, 2105, JB Straubel, Tesla’s chief technology officer, said, “You know, from the get-go, from the first concept of this factory, we wanted to make it a net-zero facility. So…the most visible thing we are doing is covering the entire site with solar power. The whole roof of the Gigafactory was designed from the beginning with solar in mind.’

“We kept all of the mechanical equipment off the roof. We didn’t put extra…penetrations through the roof that we didn’t need to and it’s a very, very clean surface that we can completely cover in solar. But that’s not enough solar, though. So we have also gone to the surrounding hillsides that we can’t use for other functions and we’re adding solar to those.”

Keep in mind that “net zero” does not mean the building will not be connected to the grid. It means the building will put back into the grid as much electricity as it takes out. The plan is for the Gigafactory to not directly consume any fossil fuels and for the solar installation to provide most of the power needed by the facility. Any excess power generated during the day will be stored by Tesla Powerpack power storage batteries for use at other times.

It only makes sense that Tesla, which manufactures all-electric automobiles, would have an all electric battery factory. Zero carbon emissions are what the company is all about. The factory will recycle waste heat from the manufacturing process for other purposes, such as heating the the building itself.

A closed-loop water system will recirculate 400,000 gallons of water, reducing fresh water usage by 80% compared to a normal factory. An onsite battery reprocessing facility will also allow Tesla to recycle old battery cells into new cells at the Gigafactory.

When Phase 2 of the Gigafactory is completed, Tesla expects the facility to produce 35 GWh of battery cells and 50 GWh of energy storage battery packs each year. That’s more than the entire worldwide production of lithium ion battery cells in 2013 and enough to manufacture battery packs for up to 500,000 Model 3 sedans each year.