Note: One of our reporters was at the reveal and will be writing an article about the event and the new products as well.

On October 28, Elon Musk played ringmaster while Tesla and SolarCity showed off their new line of glass solar tiles that generate electricity but look like conventional roof shingles and tiles. Musk told an audience of several hundred invited guests that between 4 and 5 million new roofs are installed in America every year and many times more than that are installed worldwide. If the cost of a solar roof was less than what a homeowner would spend for a conventional roof plus utility bills that wouldn’t have to be paid over the roof’s 30 year useful life, “Why wouldn’t you?” Musk asked.

Good question. To be honest, conventional rooftop solar systems are not aesthetically pleasing to look at (in my opinion). The main advantage to Musk’s solar roof is that it adds to the look of a home instead of detracting from it. The solar roof tiles will come in four styles. The first looks like a conventional black roof shingle. The second resembles a conventional slate roof. Its individual tiles vary slightly in shade, making for a roof that is the most attractive of all. Third is called Tuscan and looks like the curved terracotta roofing tiles common throughout southern Europe and California. The fourth option is called textured glass and is visually appealing as well.

The secret sauce in all this is a series of micro-louvers built into each tile, technology developed in cooperation with 3M Corporation. The louvers allow sunlight to shine directly on the solar cells below but hide them from view from the street. The result is the best of both worlds — solar panels that generate electricity and a roof that generates compliments and adds value to any home.

To show off the new roof products, Tesla took over four houses on the back lot of Universal Studios that once served as the set for the reality TV series Desperate Housewives. Each house had its old roof stripped off and replaced with one of the four styles of glass roof tiles that Tesla and SolarCity will offer. Naturally, each home had Tesla automobiles parked in the garage to emphasize that having a solar roof means sufficient power for the inhabitants with enough electricity leftover to charge electric vehicles.

The missing link in that scenario is battery storage. Tesla has recently introduced its second generation Powerwall with double the energy storage capacity as the original — 14 kWh versus 7 kWh. It is less sculpted than the original but comes with the inverter built in, which should simplify installation. The original cost is about $7,000 including an inverter and installation. Musk says the new unit should be capable of meeting the needs of a family of four for lighting, normal household use, and a refrigerator for about a day if there is a power outage. Notably absent from his example is any mention of heating or air conditioning. 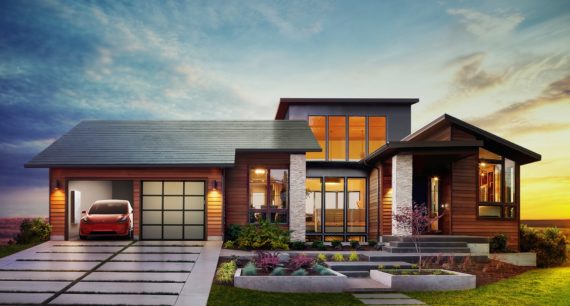 The Powerwall 2.0 with double the power should cost about the same as the original after installation, which illustrates how quickly the prices of energy storage products are dropping, The original has only been on the market for about a year and already we have a new version with twice the power for about the same money. Elon let slip that he expects Tesla to sell more Powerwalls than automobiles. 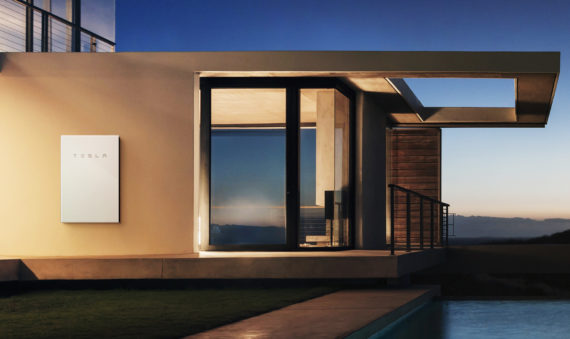 Musk emphasized during his solar roof presentation that his overarching goal is for the world to transition to 100% clean, renewable energy from the sun as quickly as possible. If the world fails to complete that transition in time to prevent massive disruption from climate change, it won’t be for lack of trying on Tesla’s part. Many people mistake Tesla for an electric car company that also makes batteries. It is just the opposite — a battery company that also makes electric cars.