We’re gonna unveil the Tesla home battery, or consumer battery, that will be for use in people’s houses or businesses, fairly soon. We have the design done, and it should start going into production probably in about six months or so.

We’re trying to figure out a date to have the product unveiling — it’s probably in the next month or two. It’s really great. I’m really excited about it. 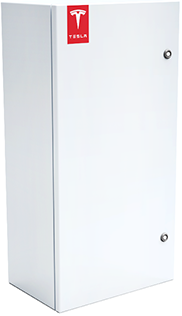 That was Elon’s statement regarding the next step of electricity storage for Tesla Motors. Of course, this product is sure to be available with SolarCity solar panels, as well as separately.

So, without more details until the unveiling, we can’t provide much more info. However, a bit of context could be helpful.

Within the electric vehicle market, Tesla is expected to be using the lowest-cost batteries. The battery cells come from Panasonic, while Tesla turns them into battery packs. There’s a lot of competition in the electricity storage market, but there’s a good possibility that Tesla could offer some of the most competitive consumer batteries on the market.

As of right now, it makes little financial sense for the large majority of people who go solar to also get a battery storage system and go off the grid. However, it is widely expected that, with solar panel costs continuously coming down and battery costs doing the same, that day could come about for millions, tens of millions, or hundreds of millions of people before too long.

For now, it would be assumed that these Tesla batteries would be targeted at homeowners interested in backup storage in the case of an electricity outage, or for people who are way off the grid and would have to pay hundreds of thousands of dollars to have the grid extended to them. But, who knows, perhaps the cost of Tesla’s batteries is even better than most of us think….

Shared Solar: How To Get Community Solar To The Next Scale