The Future Of PV: Consume All You Capture

By Stu Statman, Vice President of Engineering at Sunverge Energy

Hawaii’s Public Utilities Commission recently approved two new tariffs to cover future rooftop solar installations, including an option that’s gaining favor with consumers: Solar “Self-Supply.” Also known as “PV self-consumption”, it’s an option where a home consumes all the solar energy produced by its PV system, rather than pushing a portion of that power out to the grid. 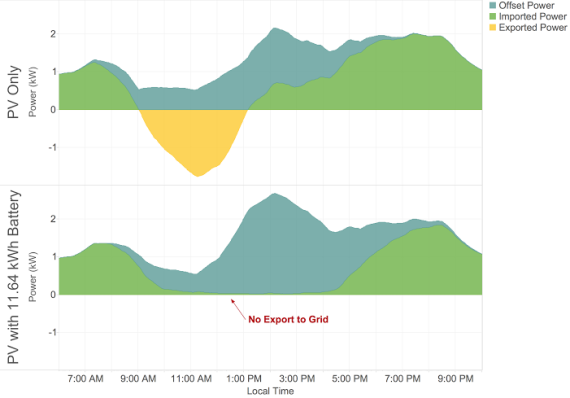 For consumers, Solar Self-Supply can keep their energy costs quite low, because the nominal price for a kilowatt of solar energy is zero. That’s especially important in a place like Hawaii, which has some of the highest retail electricity rates in the nation. While PV self-consumption sounds good in theory, it’s a lot harder to achieve perfect PV self-consumption in practice. The hours of the day that produce the greatest amount of solar power also happen to be times when most residential consumers have the least use for it. Another one of the challenges in doing perfect PV self-consumption is having the inverter follow the load exactly. Because of how electricity meters report data (in samples, not continuously), the inverter has to chase the demand, leading to small amounts of power being imported and exported.

The way to solve these problems and rebalance supply and demand is with energy storage, in the form of batteries connected to the PV installation. With the right storage system, consumers can capture power when the sun is most intense, and then have it available when they need it later in the day, especially after the sun goes down.

This kind of setup allows home storage to act as a substitute for the grid in the same kind of push and pull relationship consumers have under a net-metering model. With net metering, consumer PV systems use the grid as their “battery;” they push to the grid when producing excess power, and draw from the grid when their demand outstrips the immediate capacity of their PV system.

To make local energy storage work, however, consumers need to make sure the system they install can be an effective substitute for the grid. That means a home storage system that is properly sized and configured for the expected demand. Three constraints determine the efficacy of any home storage solution in a “self-supply” or perfect consumption option:

1) The size of the battery

While this may seem an obvious consideration, it’s often overlooked. The battery needs to be large enough to take in much of the power captured by a PV system during the day and also large enough to supply a meaningful amount of electricity later, when the consumer needs it in the home.

Some batteries just aren’t sized for perfect consumption. For example, the Tesla Powerwall, when used daily as a storage battery, can hold 6.5 kWh. Most PV installations in Hawaii and California – two of the leading solar states for residential installations – now average approximately 7 kilowatts peak (kWp), meaning they can fill this battery in less than an hour during peak sunlight. The rest of the power produced by the PV must be dumped to the grid, which is anathema to the goal of perfect consumption (and, under the new Hawaii tariff, will not be allowed).

This piece of hardware converts the DC current from a PV system to AC current to charge the battery. Inverter-chargers have a maximum rate at which they can convert electricity. Not infrequently, the inverter-charger installed in a home storage system hasn’t been optimized for the PV system or the battery. So a homeowner with a 7 kWp PV installation may well have an inverter that’s limited to 5 kW, which means that the system will fail in capturing and transferring the full supply of energy from the solar panels.

3) The charging rate of the battery, also known as the C-rate

Looking again at the Tesla Powerwall battery, with its C-rate of just under .5, the battery’s output and charge rate is limited to less than half of its effective 7 kWh size per hour. By contrast, the C-rates on Sunverge battery systems, which are near 2.0, can get users closer to perfect consumption.

But even with larger C-Rates, the battery must be sized correctly—bigger is generally better. Batteries, of course, grow more expensive with size, so it’s also important that home energy storage systems include a software management platform that will balance power loads to most efficiently run appliances and heat and cool the house. That way, consumers get the most out of the battery and don’t wind up buying more than they really need.

As utilities in California, New York and Maine, among others, follow in Hawaii’s path and dial down or cap net metering, getting closer to perfect PV consumption will be an important test for the solar industry.

Outside the United States, pushing toward perfect consumption is even more critical, because so-called feed-in tariffs, which limit the rate at which consumers can be compensated for power they push to the grid, are already in place. In Australia, for instance, subsidies that paid consumers more for their power than the standard grid price, are expiring. With a solid base of PV already installed, the demand for storage in Australia is set to sharply increase.

In Ontario, Canada, the government is set to introduce net metering rules in 2017 that will encourage more self-consumption of solar power, which will require more on-site storage for homes and industry. Before that happens, an Ontario-based utility pilot program will place Sunverge storage and cloud-based energy management systems at 20 homes in the province, which will be optimized for a future where the mission of perfect consumption will become synonymous with PV-generated power.

The Cost Of Solar Power In New York