I’ve already taken a deep dive into solar panel efficiency leaders, so I’ll skip that today. The top solar module producers vary a bit depending on which market research firm you listen to, but here are a few rankings (quite similar) from two top cleantech market research companies, Solarbuzz and IHS: 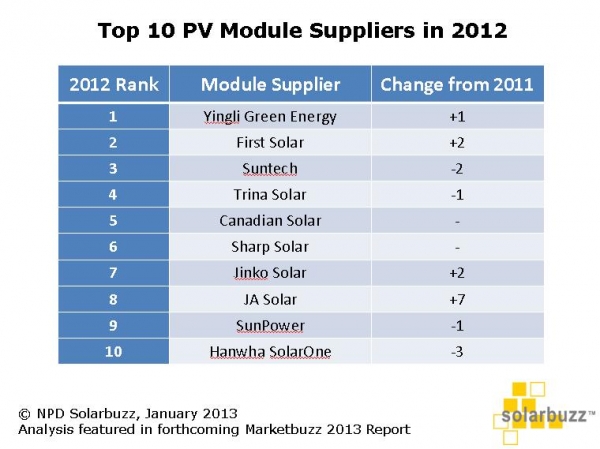 Clearly, as of the end of 2012, Yingli Green Energy (a China-based solar module company) and First Solar (a US-based thin-film solar module company) are leading when it comes to solar module production. Trina or Suntech, both Chinese companies, came in at #3. However, Suntech has gone bankrupt, so it will see a steep fall in the 2013 rankings. Other than First Solar, the only other US company on the two lists is SunPower. SunPower, unlike First Solar and most of the others on the list, produces very high-efficiency solar modules — the most efficient on the market. That makes it a leader for residential solar power systems, where higher efficiency helps to maximize limited rooftop space. 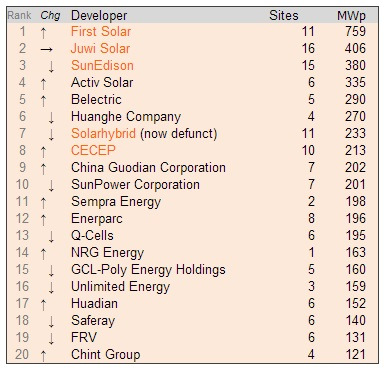 Meanwhile, SolarCity, which also provides such solar options for homeowners, claims the title of “#1 full-service solar provider.” It and Sunrun, as well as numerous other companies in this space, compete in the home solar market with very similar offerings. SolarCity also implements a lot of projects in the commercial and government arenas. SolarCity is in business in Arizona, California, Colorado, Connecticut, Delaware, Hawaii, Maryland, Massachusetts, New Jersey, New York, Oregon, Pennsylvania, Texas, Washington, and Washington D.C.

While about 75% of homeowners who have the choice between purchasing a system or leasing one decide to go with a solar lease, there are critics of this model who argue that a customer gets more out of buying a system than leasing one. However, it really depends on one’s priorities and preferences. If you get a quote from Cost of Solar, we can also call you and discuss your options so that you can decide which route is best for your situation and you.

There are actually thousands of solar installers across the US. Sometimes local installers can beat the offers provided by Sunrun and SolarCity, while sometimes those larger solar companies offer a better deal. It depends on many factors, such as the state you are in, the size and shape of your roof, the age of your roof , and so on. I think the best thing to do is talk to someone who can help you navigate the options in your area and get you the best deal for your needs.

Want a summary of the solar power companies leading a different segment of the solar market? Let us know in the comments!