The Solar Energy Industries Association (SEIA) has just come out with its third annual Solar Means Business report, showcasing the most recent trends in corporate use of solar power. 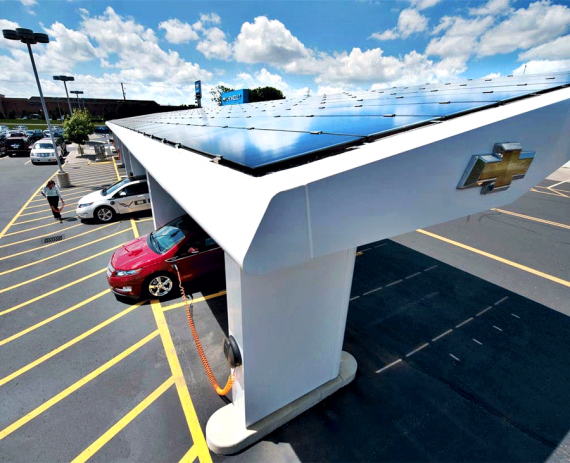 US businesses, governments, and nonprofits installed for a second year in a row over 1,000 MW of solar power capacity. A total of 41,803 businesses, nonprofits, and governments have a cumulative capacity of 4,531 MW.

Walmart again led the way amongst the top 25 corporations in installations, with 105.10 MW.

IKEA has solar power on more of its roofs, 90% of them, than any other company. Photo Credit: IKEA

Some solar power installers on the roof of a Walmart. Photo Credit: Walmart

IKEA had the highest percentage of locations having solar installed, at an impressive 90%. General Motors was second at 43%.

Falling solar prices have been critical to growing commercial interest in solar. Cost of commercial solar power plants in 2014 Q2 fell 1% on a year-over-year basis, and more than 45% in two years.

SEIA President and CEO Rhone Resch said commercial investment in solar has cut 549,296 metric tons of carbon emissions, or the equivalent of 62 million gallons of gas.

“What do Walmart, Costco and Apple have in common besides selling cell phones and computers? These iconic brands, and many others like them, are all investing big in solar energy,” Resch said. 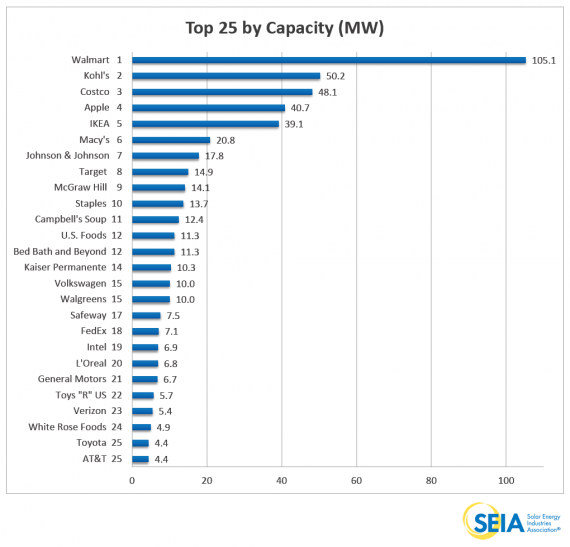 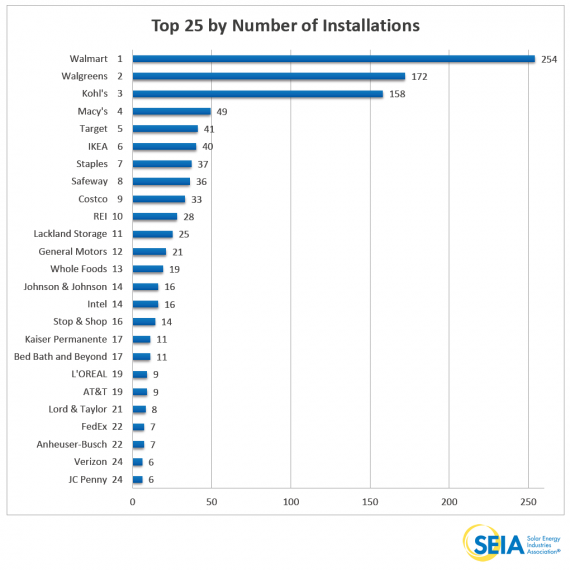 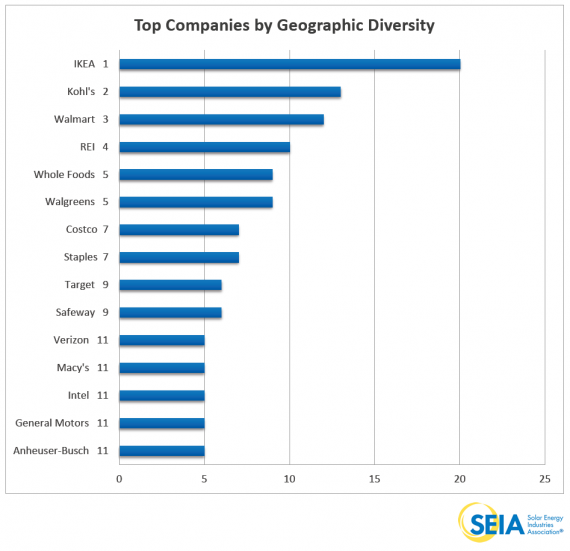 However, despite big business going green and investing in solar, it has been put under public scrutiny in recent weeks.

Also, Naomi Klein’s new book, This Changes Everything: Capitalism vs. The Climate, has chastised partnerships between big business and big green organizations as the solution for environmental problems. Klein argues companies, including Walmart, have pushed for global policies which increased carbon emissions and encouraged urban sprawl.

While ILSR and Klein have been rightly critical of big business environmental abuses, large corporations are not going to crumble in the foreseeable future, so we really need them to be on our side. Business sees renewables, including solar, as a cost benefit to them in reducing energy expenses. That view will only increase, as will corporate solar installations, so we should at least be happy about that.

Is currently studying at the School of the Environment Professional Development program in Renewable Energy from the University of Toronto. Adam also graduated from University of Winnipeg with a three-year B.A. combined major in Economics and Rhetoric, Writing & Communications. Adam also writes for CleanTechnica and has also written for PlanetSave. He also owns his own part time tax preparation business. His eventual goal is to be a cleantech policy analyst, and is currently sharpening his skills as a renewable energy writer. You can follow him on Twitter @adamjohnstonwpg or at www.adammjohnston.wordpress.com.