A joint NOAA/CIRES research study has found that greenhouse gas emissions from electric power production could be cut by 78% below 1990 levels by 2030. The National Energy with Weather System (NEWS) simulator model was used for the study, which is a tool used to simulate the electrical power sector. The model is used to help investigate what happens when large amounts of wind and solar power are added into the grid system, as Carbon Brief writes: “As the size of the connected system grows, the amount of wind and solar PV generation increases. Moreover, the cost of electricity decreases as the area increases, because the system has access to more remote, rich resources and the correlation between connected sites weakens.” 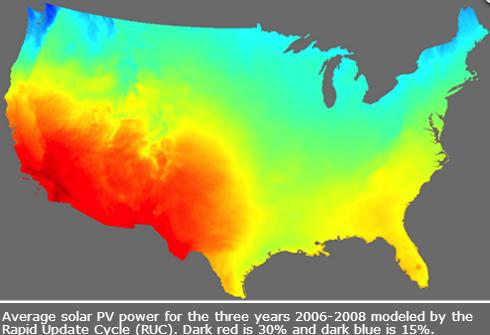 In the model, renewable energy generation potential is examined by the analysis of 152,000 NOAA weather data grid points in the continental United States and beyond, including all hours of day from 2006 through 2008.

Some folks who are concerned about the cost of renewable electricity increasing their utility bills might be relieved to hear this: “the model produces power at 8.5 to 10.2 cents per kilowatt hour, less than current national average residential costs of 12.3 cents/kWh (from the Energy Information Administration).” So, a big reduction in climate change emissions and lower costs — what’s not to like?

A new national high-voltage direct current (HVDC) network for transmission was included in the model and its cost was factored into the cost of electricity. A nationwide renewable energy generation system was used in the model as well. Carbon Brief described this system as, “Building a combination of 1,529 GW of solar, wind, natural gas, nuclear and hydro would cover the power needs of the US while reducing CO2 emissions by 78% and keeping costs lower than current projections…”

(It’s a little peculiar that the Carbon Brief quote does not includes geothermal, because it is a clean, renewable, consistently available source and there is a significant potential for it in the US.)

FAQS for the study are here.

Of course, models are not the real world and they are useful in controlled, virtual contexts. The crux of the findings seems to be a counterpoint to the doomsday discourse that seems to be common at times. With steady investments in renewable energy, better grid systems and energy storage, climate change emissions could at least be decreased to some degree and any progress would be welcome.