The US solar industry installed 1,393 MW of solar PV in the second quarter of 2015, pushing the country’s total cumulative capacity past 20 GW.

The news comes courtesy of the new Q2 2015 US Solar Market Insight Report, published by GTM Research and the US Solar Energy Industries Association (SEIA). Published on Tuesday, the report highlighted the “record-breaking trajectory” of the US solar industry. 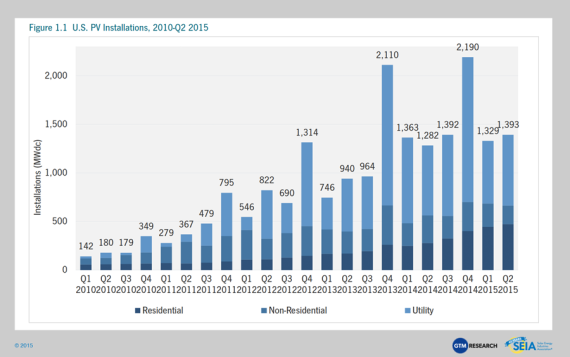 The report also highlights the fact that 40% of all new electric generating capacity brought online in the first half of 2015 in the US came from solar. 21 states throughout the country now have more than 100 MW of solar PV capacity, though the top five states in terms of solar capacity account for nearly ¾ of the total US cumulative PV capacity.

Interestingly, the authors of the report expect the second half of 2015 to “be significantly larger than the first in terms of new deployments,” thanks primarily to “a bevy of utility-scale project completions, combined with a continued ramp in the residential market and a commercial solar resurgence in select states.”

“The utility PV market continues to be the bedrock driver of new installation growth,” said Shayle Kann, Senior Vice President at GTM Research. “And in the second half of this year through 2016, growth will reach new heights as a higher share of what comes online stems from projects procured purely based on centralized solar’s cost competitiveness.”

The Future In Three Stages

GTM Research and SEIA also predicted what they believe the US solar market is going to look like through the next decade, split into three distinct stages.

Stage 1 (Today–2016) “will bring an unprecedented boom in solar installations”, the report’s authors concluded. ” Across all segments and most state markets, improved project economics, low interest rates, insulation from incentive reduction and the rush to complete projects ahead of the ITC step-down will accelerate an already-growing market to new heights.”

Specifically, GTM Research and the SEIA predict that, between July 2015 and December 2016, the US solar PV market will add 18 GW of new capacity.

Stage 2 (2017–2019) represents “the most uncertainty” in the authors’ forecast, with five macro factors coming into play:

Stage 3 (2020–2025) will “usher in a new era of growth for solar in the US” with the beginning of the Clean Power Plan compliance era,” which will “incentivize states to support (directly or indirectly) the solar market.”

Furthermore, project costs will be significantly down on today’s costs, creating a “strong competitive playing field with both retail electricity and alternate sources of wholesale generation.”

“The demand for solar energy is now higher than ever and this report spells out how crucial it is for America to maintain smart, effective, forward-looking public policies, like the ITC, beyond 2016,” said Rhone Resch, SEIA President and CEO. “At over 20 GW of installed solar electric capacity, we now have enough solar in the U.S. to power 4.6 million homes, reducing harmful carbon emissions by more than 25 million metric tons a year. Since the ITC was passed in 2006, U.S. solar growth has exploded and more than 150,000 American solar jobs have been created. By any measurement, that’s a success for both our economy and environment.”

Las Vegas To Use 100% Renewable Energy

Solar Energy Will Have A Very Good Year...