US Solar Presence Could Double For Kyocera

Kyocera wants to expand its sales in the United States, and sees opportunities in the residential solar and energy storage markets.

Sales for the company fell recently in Japan, forcing the company to look at expanding into the United States. “There is growing need for energy storage in the US residential market,” said Kyocera president Goro Yamaguchi . 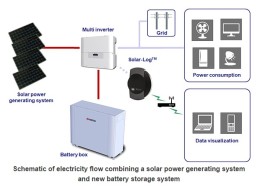 Kyocera has already partnered with the American energy storage company Stem, with the collaboration focused on commercial systems, but Kyocera has also entered the German solar power market to support residential systems. 4.8kWh and 7.2kWh energy storage systems were intended for the German residential market, so it is not unreasonable to wonder if these sizes will be available when Kyocera hits the US market. Just for comparison, the Tesla energy storage systems for homes are 7 Kwh and 10 Kwh, and they are definitely competitively priced.

One report said Kyocera might target 100,000 energy storage systems for the US market, because that is the number it worked with in Japan. One might imagine California would be a good place to start trying to sell home energy systems, because it is a leading solar state.

Kyocera also might bundle solar power and energy storage systems, which would probably be smart — consumers generally like convenience. Having one system to install that would cover all electricity needs would be easier than mixing and matching different systems.

At the same time, Tesla might partner with SolarCity or another American solar power company like SunPower to offer its own bundled system.

Either way, it will be fascinating to see what happens. Even more intriguing is the coming expansion of electric vehicles, and how they will interact with energy storage and solar power systems. For example, if you own all three, you might be able to charge the batteries fully at night when rates are low, and sell electricity back to the grid during peak times during daylight hours. Of course, you could also use your home solar system to charge batteries too. What would a payback period look like then? The environmental aspects of this situation are only one part of the equation.