Vivint Solar Teaming Up With Google For Project Sunroof

Following this weeks’s Project Roof announcement, Vivint Solar has revealed that it will be partnering with Google in the endeavour.

Google announced its latest 20% project earlier this week, the brainchild of Google employee Carl Elkin. Project Sunroof allows users to utilise “high-resolution aerial mapping (the same used by Google Earth) to help you calculate your roof’s solar energy potential, without having to climb up any ladders.” Currently only available in the San Francisco Bay Area, Fresno, and Boston areas, Google isn’t shy about the project’s possible growth. 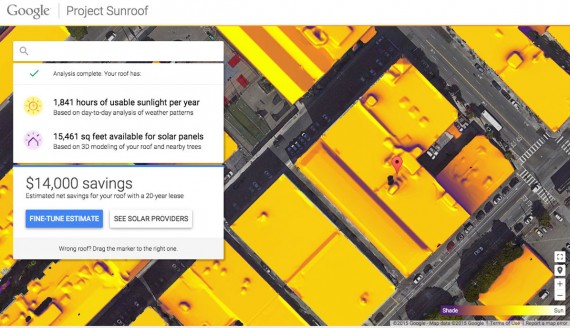 Right after that, without explaining much about exactly how, Vivint Solar revealed that it would be teaming up with Google for Project Sunroof.

In the press release, Vivint Solar repeats much about the Google project that we already know — by copying directly from the original Google Green Blog post. At the same time, however, its includes itself in the process.

“Vivint Solar teaming up with Google is giving homeowners across the country immediate insight, information and access to rooftop solar power—that’s good for everyone,” said Greg Butterfield, CEO of Vivint Solar.

Project Sunroof allows users to not only to gauge whether rooftop solar is a feasible option for their home, but it intends to also link the user with local solar providers — “like Vivint Solar.”

“Vivint Solar has created an incredible product that’s revolutionizing the energy market,” said Dwain Kinghorn, Chief Strategy and Innovations Officer at Vivint Solar. “It’s simple. It’s affordable. And together with Google, we’re able to let customers all over the country know that solar power is a lot simpler and more affordable than they might have thought.”

Presumably, Vivint Solar will provide Google with some direct access to facts and figures for their local development options, and will benefit from being a suggested choice by the tool itself.

Of course, it’s only a matter of time, then, before we see other solar companies in the US jumping on board, with competitors like SolarCity sure to join the partnership soon (if it hasn’t already).