Which Solar Panels Are Most Efficient?

One of the most common things people ask when they start to consider going solar or start to plan their life-changing solar expedition is which are the most efficient solar panels. However, first of all, that’s not even the right question for most people, and second of all, the literal answer to that question really isn’t relevant for the average consumer. Let me explain….

But, anyway, if you really want to know which are the most efficient solar panels (or solar cells) out there, I actually happened to be putting together a list of solar records recently and can give you the rundown. But, as I do so, I’ll drop in a few key notes making the point above a bit clearer. Before looking at solar panels as a whole, let’s have a quick look at the producers of some of the most efficient solar cells (the key component of solar panels) and their efficiency records:

Now, there’s less research on solar panels than on solar cells because the core of the technology is the solar cell, so that’s what researchers at many institutes and universities spend their time on. No one is even going to try to manufacture a solar panel that won’t sell because it isn’t made of marketable solar cells. Still, there are many different types of solar panels (more accurately known as solar modules) on the market and many, many manufacturers of some of the most common types. So let’s look at the leaders in this category.

The takeaway point is:

Skip the focus on hypotheticals and irrelevant superlatives. Forget about what the “most efficient solar panels” are. Check on the solar installers in your area (you can get connected to them via our home page). See what they quote you. Ask them what solar panels they would use if you want to know. And compare your options to your heart’s content. Don’t go trying to find solar panels that were designed for NASA satellites.

By the way, the following chart from NREL isn’t fully up to date (solar efficiency records are broken quite frequently), but it gives you a good sense of the large variety of solar technologies: 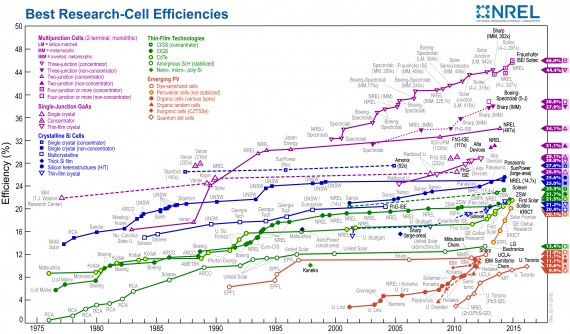