Why We Install: SolarCity Highlights Solar Jobs From A Veteran’s Point Of View

Veterans and solar jobs make a perfect match, and to underscore that point in honor of Veterans Day, the leading US solar installer SolarCity has produced a video spotlighting a SolarCity Senior Inspections Coordinator and former US Army sniper, Frank Sandoval. In the video, Sandoval makes a great case for the restorative power of work with a purpose, and solar jobs in particular.

The SolarCity YouTube video tells a compelling story, but it’s not the whole story. CleanTechnica got the inside scoop from Sandoval himself in a phone conversation last week, so we’re happy to fill in (many) more details with the following exclusive interview. 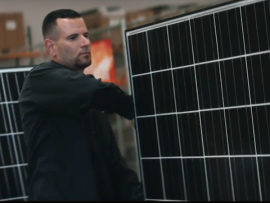 I’ll never forget this. I was on top of a house in Pasadena and someone stopped, honked their horn and gave us a big thumbs up because they saw solar panels going up on this house, ran to the store, bought us a case of water, and brought it to us.

That’s when I started paying attention to what I was actually doing.

When I started with this company I thought it was just construction. You know, that doing renewable energy is a different type of construction. So, my mentality was construction. But I didn’t actually realize until that moment that I saw that person. It wasn’t even a customer, it was a random person that had seen us, and was excited about it, and at that point I really started telling myself like what am I actually doing?

And then I started doing my own research, and then it kind of blew up from there, as far as my passion.

That was just one [instance]. If I had a quarter for everyone who said, “We’re happy you guys are here in the neighborhood, we’re excited, we’re going to get it ourselves,” or the neighbor says “we’re excited about this,” I wouldn’t have to work. I would be a rich man.

Climate Change Or Not, Solar Jobs Are Important

In the course of our somewhat casual conversation, Sandoval’s research clearly shows. He makes an essential point about sustainable energy, regardless of the source:

As far as the reason why I’m here, it’s not necessarily for the climate change…I’m a big fisherman and hunter, and I notice a lot of resources are being [mis]used, like water is being used to cool down nuclear power plants. I’m a firm believer that we’re not overfishing, we’re overusing the waters.

With solar, it stops that. It’s a tool that stops the destruction of our environment.

Fossil fuels and things like that really destroy the natural resources that we have. If we can have the same kind of energy without destroying our land, then why not.

Solar jobs are just one good renewable energy match for veterans. The wind energy industry, for example, also has a great appreciation for the skill set that veterans bring to wind turbine installation and other aspects of that sector.

One difference with solar jobs, though, is that today’s active duty service men and women are beginning to come into civilian life with a hands-on appreciation for the uses of solar energy.

Sandoval returned home several years ago, before the Department of Defense began ramping up its adoption of solar energy, but he explains how he was able to see the advantages of renewable, scavenge-able energy as the first pieces of solar equipment began trickling in:

Before I left, solar was mentioned. It was a different way of using energy, because we were using generators, and these things are loud and obnoxious. You can hear a generator for miles away.

That was the change that I started seeing in the military. And you know, the military is using a lot of solar for everything. Out in the field, you can get power. You don’t need a generator, you don’t need a fuel truck….all that logistics in a combat scenario, it takes a lot of timing.

So if you can put a solar panel, that you don’t have to keeping this thing fueled, to keep giving it power, then that’s a win-win.

Sandoval found SolarCity through a veteran, and before we rang off he made sure to bring this message to more of his fellows:

When you come home, you have a home with SolarCity. You can put down your M4 memories, pick up a drill, pick up a hammer, and start solar memories.

US Rooftop Solar Slugfest Heating Up In Nevada...