Yingli Green Energy experienced a net loss of $55 million during the first quarter of 2014, according to the figures recently released by the company. But the world-leading solar module producer is happy with its progress and movement toward its targets. 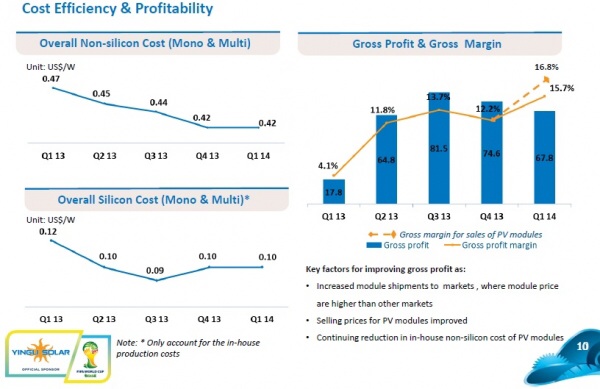 Something also worth noting in the new figures — solar PV module shipments totaled 630.8 MW during Q1 2014, a 32.9% decline from the previous quarter.

While these figures might not sound that great at first, they somewhat mask the company’s progress toward its long-term goals — the company certainly seems to be more concerned with positioning itself where it wants to be, and improving performance, than in ensuring positive financial numbers in the short term.

“I’m pleased with the improvement in our gross margin in the first quarter of 2014, which is attributable to the slight increase in average selling price of PV modules and our on-going efforts on cost reduction, and I have confidence in our ability to drive additional improvement moving forward,” stated Liansheng Miao, chairman and CEO of Yingli Green Energy. “In the first quarter, we witnessed a continued evolution of end demand diversification with exceptional demand from Japan and other emerging markets coupled with steady growth from US and stabilisation in Europe, while module shipments in MW shrunk primarily due to the traditional seasonality and a slightly delay in delivery for projects in Algeria. The proportion of shipments to markets outside China, US and Europe doubled and accounted for 35% of our total shipments in the first quarter of 2014, compared with 16% in the fourth quarter of 2013.”

Other figures worth noting:

In related news, Yingli’s stock, along with that of many other solar companies, saw a bit of a bump recently as a result of SolarCity’s acquisition of the solar panel manufacturer Silevo, and it has also been rising as it is a core sponsor of the ongoing 2014 FIFA World Cup in Brazil. We’ll see how far that takes the company, and if the rise keeps going or if there’s pullback.