Announcing plans to launch its first global yieldco investment structure, Canadian Solar anticipates the IPO may be available on a US Stock Exchange as early as the fourth quarter of 2015.

Dr Shawn Qu, chairman and CEO of Canadian Solar, spoke recently about the new yieldco investment product under development. “We have been reviewing various options to structure and potentially list our downstream business,” said Qu, “and we are now planning to form a yield co vehicle, in order to maximize value creation for our shareholders over the long-term.” 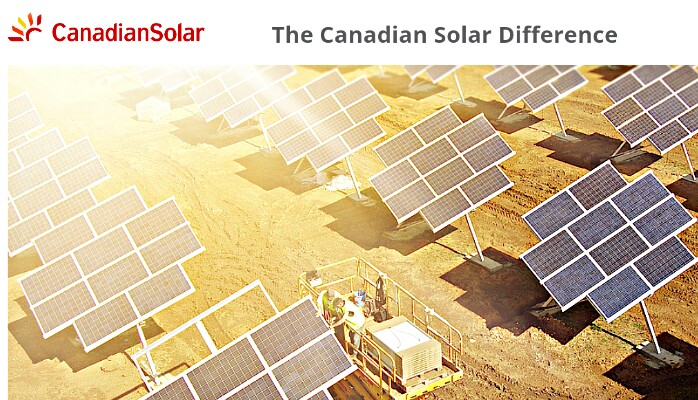 As the National Renewable Energy Laboratory (NREL) explains succinctly in an article titled, A Deeper Look into Yieldco Structuring, “A yieldco is a dividend growth-oriented public company, created by a parent company.” Yieldcos create portfolios of “renewable and/or conventional long-term contracted operating assets in order to generate predictable cash flows. Yieldcos allocate cash available for distribution (CAFD) each year or quarter to shareholders in the form of dividends.”

NREL explains that the parent company is required to own a majority share of the yieldco (Class B Common Stock). Public shareholders are entitled to a minority share (Class A Common Stock).  The revenue produced from projects owned by the “operating subsidiaries” passes through this structure, delivering returns to the yieldco shareholders. Adapted from NRG Yield, the image below outlines the yieldco organizational structure: 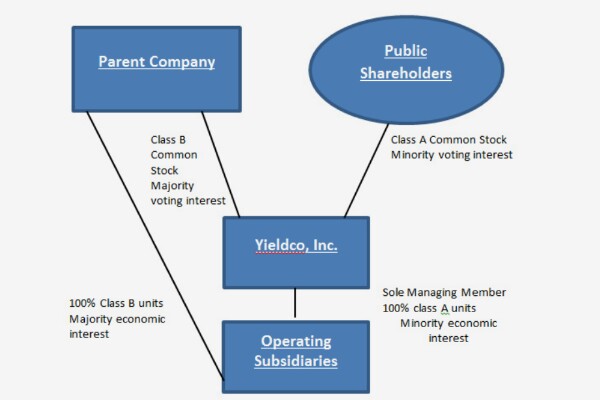 The Current Crop of Yieldcos

Since their IPOs, reports Konrad, the current crop of yieldcos has gained from between 15% (Abengoa Yield) and 127% (NRG Yield). Simultaneously, these firms are paying out dividends and selling large quantities of stock in secondary offerings, which is funding their planned growth and raising cash for their sponsors.

Stocking its portfolio with a broad mix of assets is important to ensure a steady stream of revenue for a yieldco. The NREL reports that Abengoa Yield’s portfolio includes 86 miles of transmission lines, but TerraForm Power’s portfolio contains solar Distributed Generation (DG) projects. TerraForm Power is also expected in the future to add natural gas and hybrid energy generation assets. Assembling its initial portfolio with 25 assets spread over 10 states, NRG Yield has conventional generation assets accounting for 36%, renewables for 16%, and thermal energy/co-generation making up 48%.

According to the NREL, the structure of yieldco investment vehicles have additional tax advantages. Rather than taxation occurring twice, once at corporate level and then again at shareholder level, the yieldco may pass untaxed earnings through to investors. This is accomplished by matching strong positive cash flows, or basically asset income, with losses, or basically expenses and renewable asset depreciation. When losses exceed the taxable income on the assets, these “net operating losses” result in taxable income reduction, thereby resulting in taxation on lower annual earnings. The company may conceivably even avoid taxation completely.

Additionally, net operating losses may be “carried forward” for future taxable events. With this appealing strategy, many yieldcos anticipate not having to pay significant income tax, conceivably for several years. And at the shareholder level the dividends may be treated more favorably as a return of the original investment, rather than as a return on investment.

The Critical Pipeline “Drop Down”

The yieldco business model requires planned acquisition of new generation assets to maintain favorable tax benefits and steady yields as its initial portfolio assets approach contract expiration dates. This pipeline of planned asset acquisitions is termed “drop down.” The drop down fuels the yieldco with a steady cash flow, enabling it to offer both above-average dividend growth and below-average risk.

To reduce the uncertainty of future cash flows and ensure access to assets, NREL explains that agreements such as “right of first offer” or “call rights” are common between the yieldco and the parent company. Yieldcos can conceivably continue scheduling drop downs for any length of time that the company desires to hold onto its tax advantages, so long as the requisite supply of new generation assets are available for acquisition.

“We are engaged in the process of analyzing the optimal structure for a yield co, including the optimal asset profile,” said Dr Qu. To support the new yieldco investment vehicle under development, Canadian Solar plans to acquire Recurrent Energy, the project development wing of Sharp Corporation. This acquisition is expected to provide Canadian Solar with the requisite quantity of high-value assets in the pipeline for a drop down into the planned yieldco.

Canadian Solar’s total solar project pipeline, once the Recurrent Energy acquisition is complete, will reportedly increase by around 4–8.5 GW. Importantly, its late-stage, utility-scale solar project pipeline would increase by approximately 1–2.4 GW. Around 1 GW of late-stage, utility-scale projects are anticipated to be built before the 2016 expiration of the US Investment Tax Credit (ITC). The company pointed out that this late-stage pipeline represents an estimated revenue opportunity of at least US$2.3 billion in revenue under its build and sell business model.

Positioned strategically alongside the yieldco structure, the build and sell model is useful for retaining the company’s liquidity. “We expect to complete the sale of those Canadian projects for which we have an identified end-buyer,” said Dr Qu. Continuing. He added, “We may, however retain other projects that we have developed for eventual inclusion in the asset base of a yield co structure or add additional assets from third parties.”

The global yieldco investment vehicle that Canadian Solar is evaluating “would incorporate PV projects from highly developed OECD countries that have stable markets such as North America, Japan and Europe.” However, not all of the firm’s assets may be dropped down to the planned yieldco, such as its projects in China, which will receive further evaluation.

Regarding the high potential investment value of the planned yieldco, Canadian Solar Chairman and CEO Qu stated, “We expect that a yield co vehicle and its subsequent listing would enable us to capture the value inherent in our large pipeline of long-term contracted assets and to recycle capital.” He added, “We plan to update the market as the process evolves.”

West Texas City To Be 100% Powered By Solar & Wind Energy