National Renewable Energy Laboratory (NREL) Director Dan Arvizu recently gave a keynote speech during the 2013 International Renewable Energy Conference (part of Abu Dhabi Sustainability Week), which I was lucky enough to attend in January*. His speech covered a large variety of cleantech topics, and most of the points I’ve covered extensively over the years. However, a couple of his points stood out to me as rather interesting and relatively uncovered.

Some of them are the foci of the interviews I conducted with him after his presentation (see the posts linked on the bottom of this article). But I decided to leave a couple of the points out of our interviews since they’re pretty straightforward and the chart presenting them is available on the NREL website, and now right here: 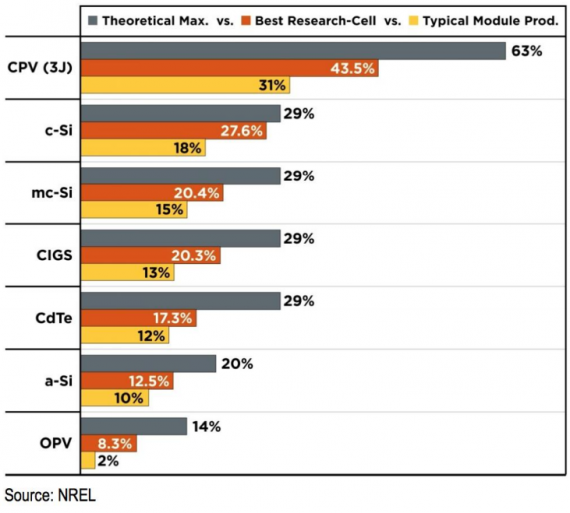 The takeaway points from the chart are:

Thin-film solar panels were super hot until the price of conventional solar PV fell out the bottom and took nearly complete control of the market. Nonetheless, even today, First Solar (the leading thin-film solar company in the world) is the world’s #2 solar module manufacturer and #1 solar developer. Looking at the potential for efficiency improvements of this technology, thin-film solar’s future looks even brighter. (And, FYI, I talked with First Solar’s CTO the same day that I interviewed Dan Arvizu, and he hinted at the same thing, but couldn’t provide me with details on this matter at that time.)

The general benefit of thin-film solar is that it’s cheaper than conventional PV. Its downside is that it’s less efficient, but as you can see in the chart above, its theoretical efficiency limit is equal to or better than every other type of solar besides CPV (which is very efficient but still quite expensive).

Of course, there are thin-film solar companies other than First Solar that are vying to take a bigger portion of the market (such as Australia’s Solar Frontier), and they are trying to develop better thin-film solar technology in order to do so. And improvements to thin-film solar cell efficiency are being made regularly in labs and universities around the world. So, overall, it seems that we can expect that gap between real-world efficiency and theoretical efficiency to keep closing.

I guess the question this leaves us with is which technology or technologies will improve their real-world efficiencies using low-cost materials quickly enough to dominate the solar power market in the coming decades? 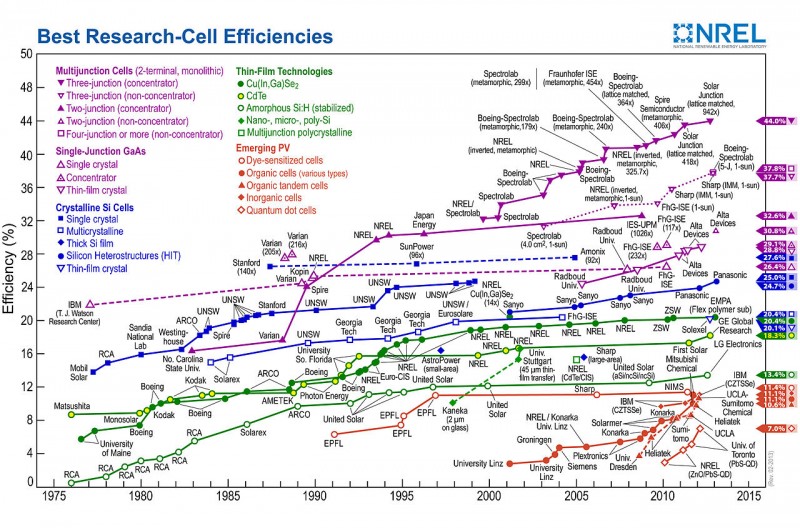 But one thing is clear: as solar becomes more efficient and cheaper, there’s no stopping its solar power growth across the world.

For more from this jam-packed day at the 2013 International Renewable Energy Conference, also see:

*Full Disclosure: my trip to Abu Dhabi Sustainability Week was funded by Masdar. That said, I was completely free to cover what I wanted throughout the week, and at no point did I feel under pressure to cover any specific events or Masdar in any particular way.

For more content from my trip to Abu Dhabi, check out the CleanTechnica archive pages for Abu Dhabi Sustainability Week, the World Future Energy Summit, and/or the International Renewable Energy Conference.