If I was a gambler, I’d put some of my money on First Solar (and, to be honest, I’m thinking about it). Some of its latest big announcements, which I’ll discuss in more detail below, include: crushing the world record for cadmium-telluride (CdTe) photovoltaic (PV) module conversion efficiency (bringing the record up from 14.4% to 16.1%); acquiring TetraSun (which will probably lead to some more world records); announcing an attractive full-year 2013 guidance and some positive summary financial targets through 2015.

Yep, from the looks of it, First Solar is a record-breaking fiend. That might also explain why it’s the #1 solar developer and #2 solar module manufacturer in the world.

Going on: “Transferring its success in the R&D lab to its commercial modules, First Solar also launched a new evolution of its proven Series 3 thin-film PV module platform, the Series 3 BlackTM, which incorporates First Solar’s latest advances in conversion efficiency as well as additional features to enhance its performance in utility-scale power plants. The all-black module’s change in appearance results from the use of an advanced, all-black edge seal technology combined with an innovative encapsulation material that further enhances its field durability and demonstrates improvements in accelerated life testing results.”

Remind you of something? Perhaps SunPower’s new X-Series solar panels (which are quite black themselves and also hold a world record in efficiency).

For more details on First Solar’s new modules, check out its press release on them. One last thing I’ll note from this release is that the company is now moving forward its efficiency roadmaps because of the faster than expected improvements:

“Based on the Company’s record-setting technology and robust Series 3 Black platform, the Company also has accelerated its module conversion efficiency roadmap, raising its lead production line module efficiency target for 2015 to 15-16.2 percent. First Solar also extended its module conversion efficiency roadmap to 2017, with targets for lead production line module efficiency of 16.2-16.9 percent in 2016 and 16.4-17.1 percent in 2017.”

I spoke with First Solar’s CTO in January at the International Renewable Energy Conference (part of Abu Dhabi Sustainability Week), at which point he mentioned that they had some big news coming out within a few months (but which he couldn’t yet disclose). I have a feeling the above is what he was referring to, or perhaps it was the story below. 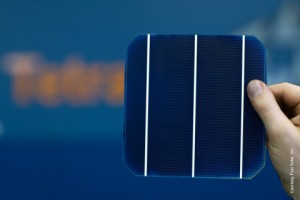 While the first story above makes clear that First Solar has a pretty tremendous in-house R&D team, and I’ve mostly seen its advancements coming out of that, purchasing a little bit of breakthrough technology (and the innovators who created it) can’t hurt. Regarding the TetraSun innovators, all 14 of them are now joining First Solar, some of whom have previously worked at SunPower (remember that note above?) and Fraunhofer, a world-leading research institute based in Germany. Here are some more details on the acquisition and TetraSun technology:

First Solar signed a definitive agreement to acquire TetraSun from JX Nippon Oil & Energy Corporation and other investors, including TetraSun management. Terms of the transaction, which is expected to close in the second quarter of 2013, were not disclosed. First Solar and JX Nippon Oil & Energy also have entered into discussions on an agreement to distribute the technology in Japan.

“This breakthrough technology will unlock the half of the PV market which favors high-efficiency solutions, which has been unserved by First Solar to date,” said Jim Hughes, CEO of First Solar. “This new capability to meet the needs of customers with distributed generation applications, coupled with our leading CadTel offering which remains the benchmark for utility-scale systems, gives us a unique end-to-end suite of solutions to serve the full spectrum of commercial applications.”

Most likely, by “the PV market which favors high-efficiency solutions,” Hughes is referring to rooftop solar. Of course, there are some other segments as well, but I think that’s the big one for that portion of the market.

For a couple more quotes on this acquisition, see the full First Solar press release.

If the above wasn’t enough good news for you, First Solar has even more:

In addition to the 2013 detailed guidance, the Company also provided a summary outlook for 2014 and 2015 as follows:

Naturally, with so much good news, First Solar stock has jumped considerably. From Reuters: “First Solar shares logged their biggest ever one-day jump on Tuesday after the company said revenue and earnings for the next three years would be well above most Wall Street estimates and announced that it would acquire a new solar technology.”

No, I have no financial interest or ties to the company, but maybe it’s about time I jump on board. I’ve been thinking about it for awhile, and while jumping in right after a steep rise may not be advisable, it’s worth noting that this is nowhere near the company’s all-time high. “They hit a high of $41 earlier in the session, a level unseen in more than a year, but still far below the $300 the stock traded for five years ago,” Reuters adds.

As far as the unexpected departure of First Solar’s executive vice president of global business, Jim Brown, we’re still not quite sure what happened there.

And if you missed some of First Solar’s other recent news, it recently acquired a 150 MW solar power plant in Imperial County, CA; and became an investor in the massive Desertec project in the Middle East, North Africa, and Europe.