Yep, the the NFL’s quite successful Denver Broncos have just signed an agreement with Ascent Solar, which produces thin-film, flexible solar modules (like used on the tent below). 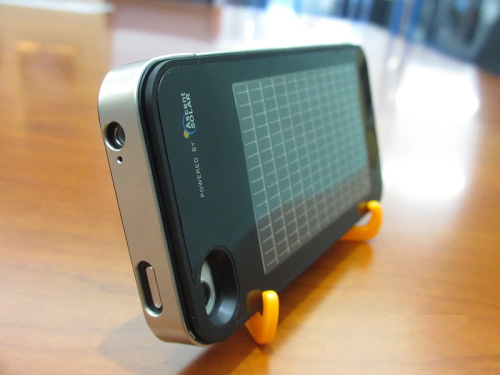 So, it wouldn’t be the best option for the Denver Broncos if the Broncos wanted to go solar. And, indeed, the Broncos aren’t going solar with Ascent Solar’s technology. The agreement is an advertising agreement. Ascent Solar has become one of the Bronco’s “Hometown Sponsors.” Not a bad idea, I’d contend. As I’ve argued many times, solar companies need to up their advertising game.

The Denver Broncos are one of the most successful teams in NFL history, winning two Super Bowls and six AFC Championships. With an intensely loyal fan base, the team has succeeded in selling out every regular-season home game since 1970 and growing its waiting list for season tickets to over 40,000 accounts.

Victor Lee, Ascent Solar’s President & CEO, said, “The Denver Broncos exemplify what is best about the NFL, a tradition of excellence on the field and a spectacular fan base which passionately supports its team.”

Mr. Lee continued, “The Broncos have arguably one of the best, most loyal and most respected fan bases in the history of the NFL and Ascent is extremely proud to be a partner of the Broncos to bring our revolutionary, flexible, solar integrated products to the forefront of consumers’ consciousness, both here in Colorado, famously known as Broncos’ country, and across the United States.”

As part of the agreement, Ascent will sponsor a new technology zone inside and around Sports Authority Field at Mile High and receive advertising within the new and fully integrated IPTV solution which plays across 1,100 HD televisions throughout the stadium, as well as utilizing the newly installed 1,430’ long LED banner which extends the length of the club level façade. In addition, Ascent will also receive multiple media and advertising opportunities, among others a one-half page advertising spot in the Broncos’ GameDay Magazine which is distributed free of charge to 45,000 fans at each home game.

“The Denver Broncos are proud to have Ascent Solar as a hometown partner with the team and incorporate them within the new technology zone this season,” said Dennis Moore, Denver Broncos Vice President of Sales and Marketing.

Ascent Solar Technologies, Inc. is a developer of thin-film photovoltaic modules with substrate materials that are more flexible, versatile and rugged than traditional solar panels. Ascent Solar modules can be directly integrated into consumer products and off-grid applications, as well as aerospace and building integrated applications. Ascent Solar is headquartered in Thornton, Colorado. For more information, go to www.ascentsolar.com.

The EnerPlex brand represents Ascent’s line of consumer products. These products, many of which are integrated with Ascent’s transformational CIGS technology, provide consumers with the ability to integrate solar into their everyday lives, while enabling them to free themselves and their electronics from the outlet. For more information on the EnerPlex brand and to see the product line, please visit goenerplex.com.