Analytics company IHS has predicted solar PV production and shipments to skyrocket through the first half of 2016.

In a new forecast published Monday, IHS concluded that “installation deadlines, sunsetting solar tax credits, and other policy dynamics of the two largest global solar markets, China and the United States,” are going to push solar PV production through the roof. IHS predicts that 2015 will see an increase of 33% in global solar PV installations, reaching 58.7 GW, and though that will soften somewhat in 2016 — growth slowing to only 12%, reaching 65.5 GW — the first half of the year will reflect existing situations.

Specifically, anti-dumping trade disputes in the US market will prevent prices from falling through the first half of the year. IHS warned in late-October of a potential shortage of solar PV wafers in the US market, which is also going to play a part in H1’16 production issues. 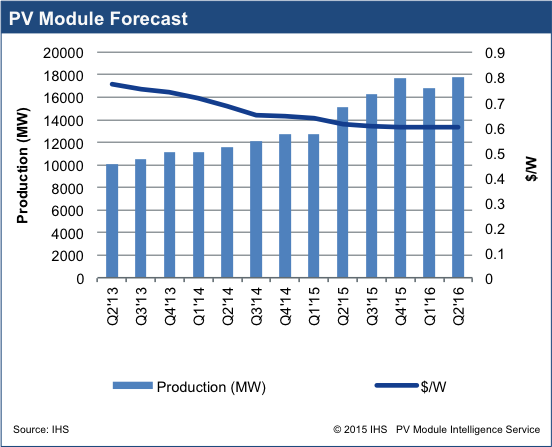 Recently announced additional solar PV quotas in China are expected to be connected by June, 2016, in order to be eligible for 2015 incentives.

Beyond the first half of 2016, however, IHS predicts average selling prices (ASPs) are likely to fall along the module value-chain. IHS predicts a stalling of utility-scale production, which throughout 2017 will see a 7.8 GW decline in annual installations, though the remainder of the global solar PV market will continue to grow, at an estimated 11% in 2017.

“Global PV demand for 2017 will slow, which will adversely affect module ASPs and margins in the second half of 2016,” Zoco said. “There will be some buildup of inventory, and module price declines will be much heavier than they were in 2015 and during the first half of 2016. A slump in global PV demand in 2017 looks increasingly likely, as the United States is expected to suffer a major decline in 2017, following planned significant reductions in the country’s investment tax credit.”