Almost across the board, it is expected that the phasing out of the federal investment tax credit (ITC) for solar will result in a big drop in US solar power installations… unless it is renewed, of course. However, one segment of the market that may be nearly immune to the drop of the 30% tax credit to a 10% tax credit is the yieldco market, according to the analysts at Deutsche Bank. 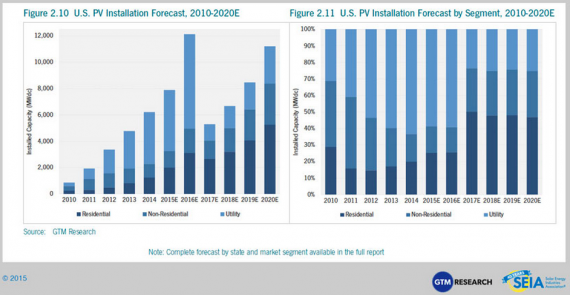 Utility-scale solar is expected to be hit very hard in 2017, following the 20% ITC drop. “But Vishal Shah of Deutsche Bank is confident that many yieldcos will feel little impact. He claims many have already untangled themselves from their tax equity partner and replaced their contribution with increased debt,” John Parnell reports.

Yieldcos have been a huge boon to the solar market, and to investors looking for low-risk, moderate-return investment opportunities in the clean energy space. SunPower, First Solar, SunEdison, Canadian Solar, and others have launched yieldco products to improve their own financial story and keep growing the solar market.

“While the cash on cash yield is potentially lower than using a tax equity partner, the yieldco certainly benefits from a higher tax shield by not including the tax equity provider,” wrote Shah. “Besides, the yield is still well above the cost of equity for the yieldcos. Second…once the ITC steps down to 10%, the CAFD [cash available for distribution] only steps down from ~US$10.56 million per 100MW to ~US$8.57 million per 100MW and the yield is still above the cost of equity.”

Looks good to my eyes.

Deutsche Bank expects a 50% compound annual growth rate (CAGR) for yieldcos over the coming 5 years, while it expects a 30% CAGR for the broader global solar power market.

While the North American yieldco market gets a lot of positive attention, Shah thinks the Chinese market is getting too much skepticism. He believes that other investors are putting too high of a risk factor on the projects.

“Unlike their US counterparts, Hong Kong-listed Shunfeng releases quarterly generation data from its solar plants offering full transparency on their performance. This offers would-be investors an indicator of their ongoing output that should go some way to making investors more comfortable with investing in them,” Parnell adds.

Akon Plans To Power Up Africa