Japanese company Kyocera is targeting the German market for home solar storage systems due to a change in that country’s pricing for home-generated solar power. Previously, the feed-in tariff, which determines how much a homeowner will be paid for the power she or he contributes to the grid, was much higher but has recently been reduced to approximately what the consumer pays to buy electricity from the grid. 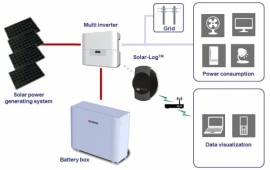 With the economic incentive to produce electricity and sell it to the grid virtually eliminated, Kyocera believes the most sensible thing for solar customers to do is add a battery storage unit to their system and consume the energy they produce themselves, since the power they create costs about 1/3 of what they pay the local utility.

“In Germany in the past we had a very attractive feed-in tariff (FiT) and we didn’t have to worry about what to do with it, but now the FiT is so close to the cost to produce a kilowatt hour of solar electricity that it’s no longer an incentive,” Weber said. “On the other hand the cost of a kWh of solar electricity is a fraction, about one third of the ‘wall plug’ cost of electricity. Therefore the issue of self-consumption, that’s a central issue. And of course if you now add a battery storage system to your system, you can easily boost up the self-consumption to 60%, maybe if you change your habits, even to 70% or 80%.”

The Kyocera system will be available in 4.8kWh and 7.2kWh sizes. The company says its multi-inverter incorporates the functions of both solar inverter and battery inverter. The battery box and inverter are housed separately.

Kyocera has been involved in home energy storage systems in Japan since 2012. “The company is enhancing sales of residential solar power generating systems in Japan,” its general manager for solar energy marketing, Ichiro Ikeda, told PV Tech recently. “Furthermore, we expect that the industry will shift to a market in which self-consumption of power is possible with less dependence on the electricity grid. Based on this expectation, we are further focusing on combined sales of solar power generating systems and storage batteries.”

Home energy storage is projected to become a thriving new segment of the home solar market in coming years, with companies like Tesla and its corporate cousin, SolarCity, set to become involved. Within a few years, having a storage battery in the basement may become as common has having a furnace or a hot water heater. Kyocera wants to be ready for this next revolution in solar power.